‘I really want to leave my stamp on the game in next five years’: World No 1 Brooks Koepka back from knee op with warning to rival Rory McIlroy

By Derek Lawrenson for the Daily Mail

Brooks Koepka gathered all his crew around him on the practice ground here on Monday for a rallying cry at the end of his three-month break following knee surgery.

‘I told them that I’m fit and rededicating myself to golf,’ said the world No 1. ‘Over the next five years, I really want to leave my stamp on the game.’

The 29-year-old Floridian, winner of four majors during the first act of his career, certainly made an impressive start to the second act with a bogey-free 66 in the first round of the Abu Dhabi HSBC Championship on Thursday. 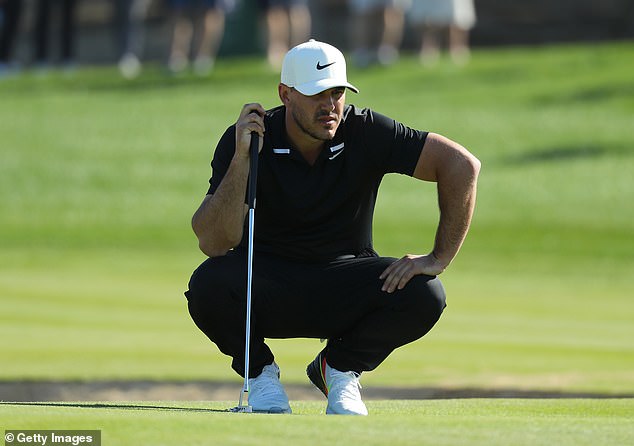 As choice examples of ‘remember me?’ go, this one was surely heard halfway round the world in south Florida and the home of Rory McIlroy, who took such bites out of Koepka’s lead in the world rankings during the latter’s absence that there’s now a sliver between them.

With Rory not starting back until next week, there might be a sizeable gap once more come Sunday. ‘I don’t know if this sends out a message, but I know what I want to achieve,’ said Koepka.

‘I expected to play well because I’d seen good signs in practice. You don’t forget how to swing a club just because you haven’t done so for 12 weeks.’

Koepka’s short-game coach, Englishman Pete Cowen, enthused: ‘Brooks told us on Monday that he wants to be the dominant force over the next few years and you can see he’s got that gleam in his eye again. With Rory playing so well, it’s going to be great for the game. You can’t beat a good rivalry, can you?’ 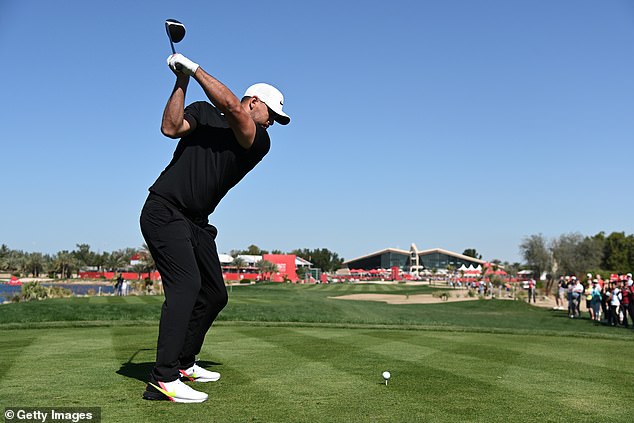 The 29-year-old Floridian, winner of four majors, carded a bogey-free 66 in in Abu Dhabi

You might not forget how to play but it can take a while to regain the competitive edge. Asked for his impressions, Koepka’s playing partner Tommy Fleetwood, who carded a distinctly rust-filled 71, started smiling. ‘He’s good, isn’t he?’ he said. ‘He looked like he’d never been away.’

On the day that stringent slow-play rules were introduced, it seemed appropriate that one of the co-leaders on 64 was Italian Renato Paratore, who might be the quickest player in the game.

He shares top spot with South African Shaun Norris, with Koepka and Australian Jason Scrivener tied third. One shot further back is Sergio Garcia, who was on his best behaviour after his antics in Saudi Arabia last year, when he petulantly scuffed up several greens and was promptly disqualified.

The desert disgrace on that occasion was a delight this time and not even an untidy bogey at his last hole could disturb his tranquil mood. 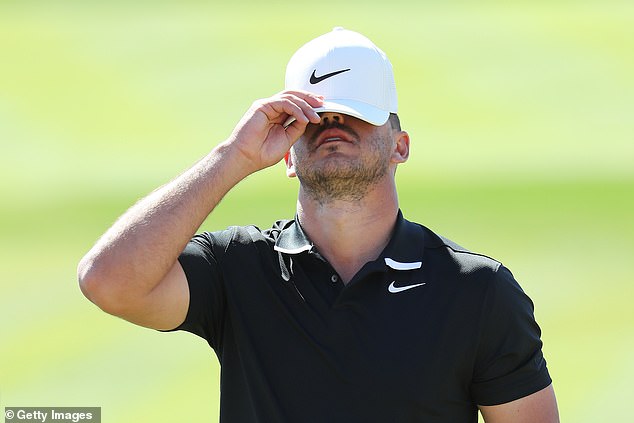 Now 40, would you believe, he showed how much he still has to offer. No prizes for guessing the main goal this year for the man who has won more Ryder Cup points than any other.

‘I saw Padraig (Harrington, Europe’s Ryder Cup captain) a few days ago and he asked me to make it easy on him by making the team and that’s my goal,’ Garcia said.

‘Even if I don’t, though, I want to play well enough so that it would make it very hard for him not to pick me.’

Teenage debutant Josh Hill struck an arrow-straight drive down the first, a wedge to close range, and knocked in the birdie putt. Nerves? What nerves?

Alas, the 15-year-old Englishman wobbled round the turn and struggled in the gathering breeze before closing as he began, with a birdie.

The Surrey youngster signed for an eminently respectable 74.

Matthijs de Ligt WILL NOT leave Juventus until at least the summer of 2021...

Tube travellers dance and sing along to busker as party breaks out in Leicester...

Married At First Sight star Cathy Evans reveals why she had...

School friends of ex-WAG at the centre of Josh Reynolds saga...