A Canadian couple were astounded while prepping their dinner last weekend when a normal everyday task of chopping up a bell pepper unearthed an incredible surprise.

Nicole Gagnon and Gérard Blackburn from Saguenay, Quebec, were prepping a meal on February 9 when Gagnon discovered a live green frog in the depths of the pepper she had been chopping up.

The frog was initially unharmed from his run-in with the kitchen knife but the couple had zero clue how the small amphibian ended up in a vegetable they’d picked up from a local supermarket.

The couple reported the animal, which was later identified as a green tree frog, to the Quebec Ministry of Agriculture, Fisheries and Food (MAPAQ) who killed the creature by euthanasia in order to carry out tests to discover how it came to be in the Canadian couple’s food. Ganon and Blackburn claim that there was no visible hole in the pepper and they could not see how the frog could have crawled in.

They immediately placed both the frog and the pepper in a separate container and reported it to the local grocery store and MAPAQ, who were both just as nonplussed.

‘It’s like the secret of Caramilk, how the frog ended up in the pepper, I don’t know!’ Gannon told Radio Canada.

Blackburn added: ‘They cannot see it. A pepper is closed. You can’t see if there is a frog in there or not.’

Since the pepper was imported into Canada, it seems from Honduras, the incident was passed on to the Canadian Food Inspection Agency to investigate the cause.

The Canadian Food Inspection Agency in Quebec receive about 20 reports a year of live creatures being found inside food but it normally occurs with insects and spiders whose appearance is easier to figure out.

MAPAQ explained that it is highly unusual to find an amphibian in food, whereas plastic or even metal are much more likely.

They also explained that they were forced to kill the frog  so the investigation could continue.

There are types on green tree frogs in both Honduras and Canada. 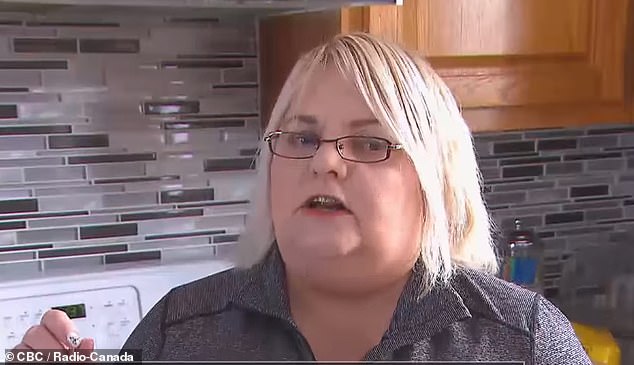 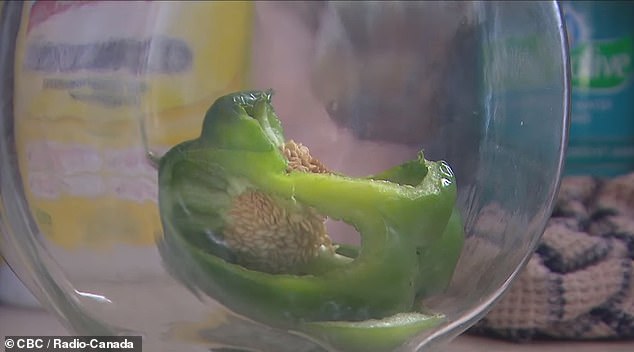 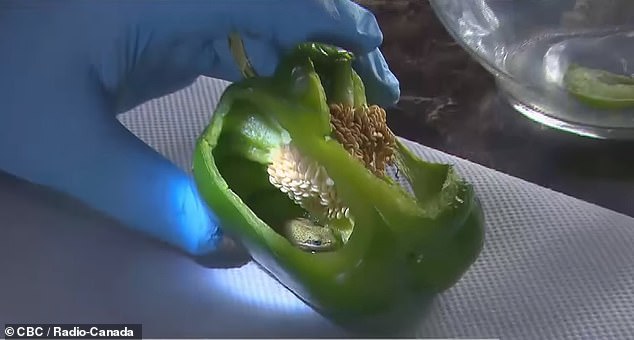 The Quebec Ministry of Agriculture, Fisheries and Food and Canadian Food Inspection Agency carried out tests on the frog in which it was killed in order to solve the mystery

‘The analysis was carried out by euthanizing the frog to carry out the laboratory expertise,’ said MAPAQ spokesperson Yohan Dallaire-Boily.

‘If we analyze it, it’s for food security, to make sure everything is healthy for the people who have consumed it or not.’

Gagnon’s son spoke to Vice and confirmed that the family had no clue how the frog found its way into the $1.99 pepper from Honduras.

‘Maybe an insect carried an egg inside. That’s my only idea. The pepper was whole,’ was his theory.

So how exactly did the frog get inside the pepper?

How closely do you check all your vegetables before you start to cut them?

While the couple claim that the pepper was whole before they started to chop, there may have been a hidden crack in the flesh through which the frog could have squeezed through and not been able to jump out of again.

One theory also goes that the frog had eaten into the pepper and climbed inside to eat more but this appears unlikely as frogs are carnivores who feed on insects.

If it did climb through a hole in the pepper’s skin, it may have been on the hunt for something else that had first carved it out. 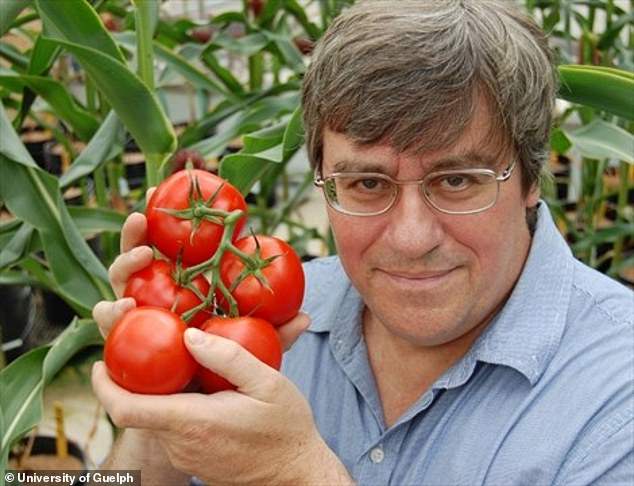 University of Guelph Prof. Barry Micallef explained a crack can form in a pepper if it is grown outside and is hit by rain in early development although the theory is unlikely in this case 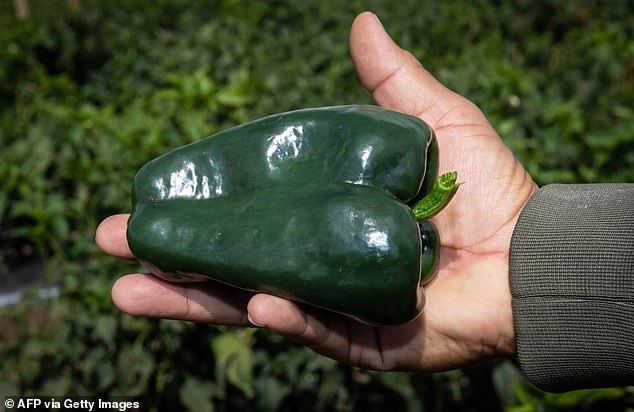 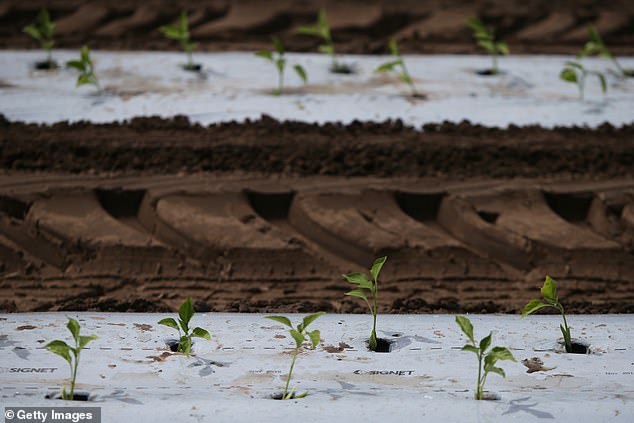 A pepper only takes between 20 and 25 days to fully mature while depending on the species of frog, it can take weeks to years for a tadpole to metamorphose meaning a tadpole is unlikely

According to Professor Barry Micallef, a plant physiologist at the University of Guelph, peppers can sometimes crack if hit with heavy rain early in their development.

‘It may have cracked with the rain,’ he told Vice.

‘Peppers are prone to cracking and splitting because they’re thin-walled and hollow inside unlike most fruit. So what I think happened is either a frog or tadpole got into the pepper and then it developed inside.’

‘If it was a young enough pepper a crack could have healed over after,’ Micallef added.

In order for this theory to work, the pepper must have been grown in a field were it would have been exposed to rainfall and not in a greenhouse. This theory would fit if the pepper did come from Honduras as they are grown on the ground there.

The frog itself would already have had to be fully formed in this instance, however, as while a pepper only takes between 20 and 25 days to fully mature, depending on the species of frog, it can take weeks to years for a tadpole to metamorphose.

The tadpole would also have to have been at the very end of its developmental cycle if it climbed in through a rain crack and was a fully-formed frog by the time the pepper was cut.

The tadpole theory does have one benefit, in that although frogs are carnivores, tadpoles are vegetarian, so would have been more happy to feed off the pepper if trapped inside.

‘If it wanted food after it could have always eaten the pepper.’

The answer from a frog specialist

According to Patrick Moldowan, the Director at Large at the Canadian Herpetological Society, this frog appeared too large at the time it was exposed to have been a tadpole when it entered the pepper.

He said that the white lip strip, horizontal pupil, and body proportions identified it as a green tree frog but that it had a strange coloring that was more than likely brought on by stress.

‘It almost certainly did not come to be a sizable adult frog by developing as a tadpole,’ Moldowan told Vice.

‘For example, the egg development time, process of metamorphosis, and post-maturity growth (to reach adult size) are well beyond the time it takes a green pepper to grow.’

Moldowan agreed with the theory that there was simply a hole in the pepper that had gone unnoticed and that the frog crawled through. 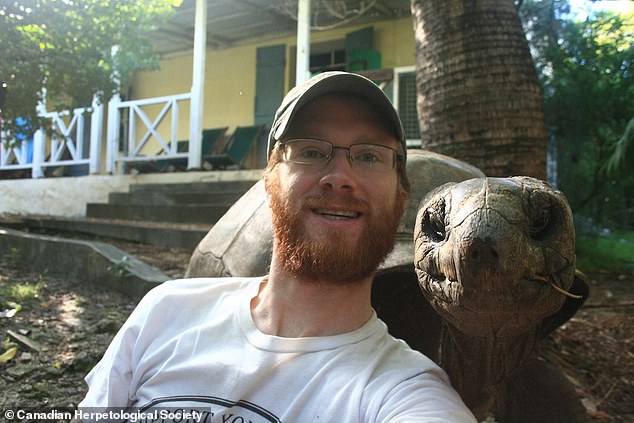 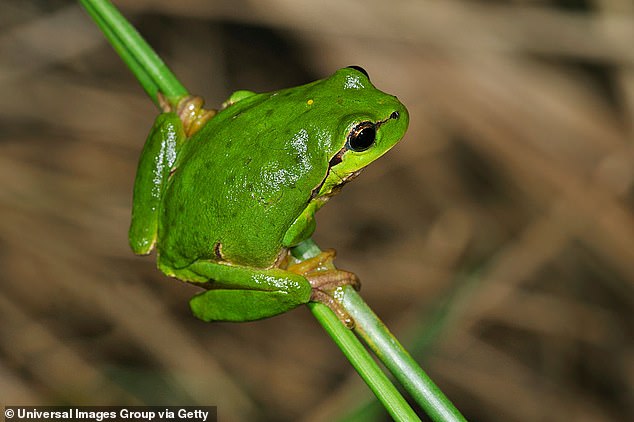 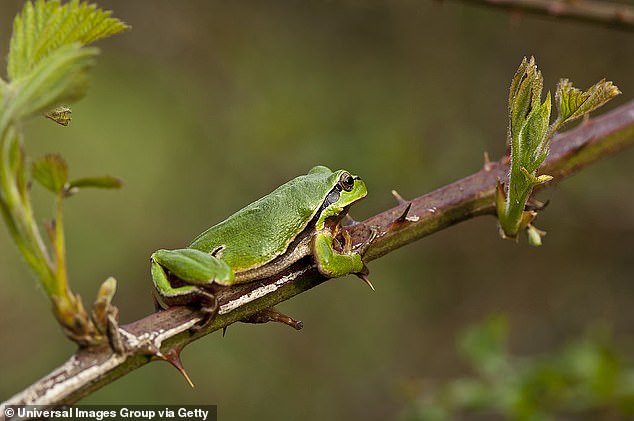 The white lip strip, horizontal pupil, and body proportions identified the frog but it was a different shade of green, thought to be because of the stress caused inside the pepper

Is this small green tree frog the second coming of Christ and we’ve just done him in yet again?

He may have croaked it but we’ll have a definite answer to this one if it bounces back to life in three days time.  Although what kind of message a higher power is hoping to send with a sign like this is anyone’s guess.

The frog has appeared in various kinds of folklore and symbolism in different cultures. It was commonly used as a symbol of fertility in ancient Egypt and by the ancient Greeks and Romans.

In medieval Christian tradition, land frogs and water frogs were used to represent righteous and sinful congregationalists respectively, so if a sign from the heavens, this frog would lead us to believe we’re on the right path.

It’s all a lie

While Nicole Gagnon and Gérard Blackburn appear to be trustworthy and honorable people from their media interviews since the viral discovery, all the very best liars do.

Could it all be a hoax to give themselves five minutes of fame? Or could they just have missed the frog jumping in while they were cutting the pepper?

Could the frog really have been transported from Nicaragua with an adult frog inside?

According to the Canadian Herpetological Society, all hope is not lost, although there is no official word from the Canadian Food Inspection Agency who carried out the investigation on the frog and pepper.

‘I would think it’s not outside the realm of possibility for a frog to survive a few weeks inside a pepper, considering it’s probably pretty humid in there, so it wouldn’t dry out,’ said Dr. Amanda Bennett, the secretary of the Canadian Herpetological Society.

‘It would be quite cool given refrigeration, so its metabolism would be slowed down by the low temperature. Ectotherms (cold-blooded animals) in general can survive longer without feeding than endotherms (warm-blooded animals).’

The timing would have had to be perfect for this to be credible: A pepper at the furthest stage of growth in which it could reseal its skin would have been hit by rain forming a crack and fallen to the ground where a frog could leap inside. The cracked would then have moved or sealed before the frog could escape leaving it inside on the long journey from Honduras to a Canadian couple’s table.

No update on the investigation was available from the Canadian Food Inspection Agency.

France on brink of crisis as Trump threatens to quadruple duty on wine –...

Dr. Phil honored with star on the Hollywood Walk of Fame