By James Wood For Mailonline

A woman who suffers from crippling arthritis and a lung condition was branded a ‘lazy slob’ in an angry note left on her car after she parked in a disabled bay.

The woman, who was parked at a Morrison’s supermarket store in Canvey Island, Essex, discovered the note after returning from shopping on Tuesday morning.

The note, which was printed on A4 paper, was pinned to the woman’s car despite her suffering from both arthritis and the lung condition chronic obstructive pulmonary disease. 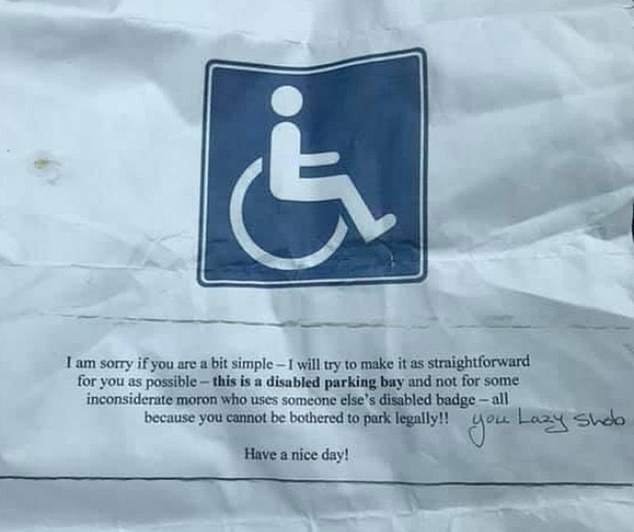 The note (pictured), which was printed on A4 paper, was pinned to the woman’s car despite her suffering from both arthritis and the lung condition chronic obstructive pulmonary disease

It read: ‘I am sorry if you are a bit simple – I will try to make this as straightforward for you as possible.

‘This is a disabled parking bay and not for some inconsiderate moron who uses someone else’s disabled badge.

‘All because you cannot be bothered to park legally. Have a nice day.’

It also had ‘you lazy slob’ hand-written on the printed note. And included a photograph of a disabled blue badge user.

The woman, who legitimately uses a blue badge, was left shaken by the incident as she suffers severe arthritis in her hands and legs and uses a walking stick to get around

Her daughter shared the note on social media, blasting the person responsible. She claimed many disabilities were not always visible and others should have more respect. 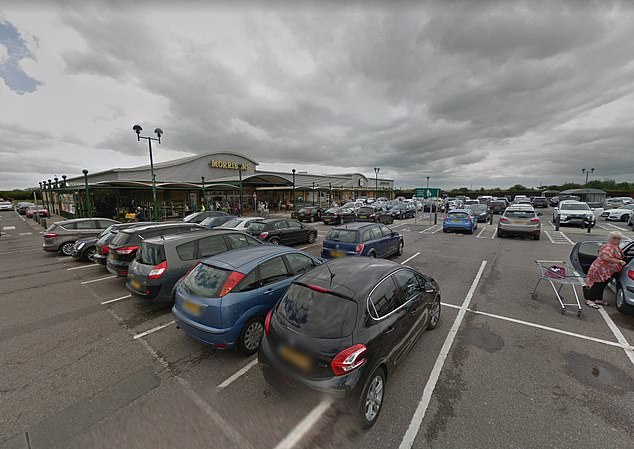 The woman, who was parked at a Morrison’s supermarket store in Canvey Island, Essex (pictured), discovered the note after returning from shopping on Tuesday morning

She said: ‘My mother wasn’t entirely sure about (me) sharing the note, as she thinks people always have their own reasons for their actions, which I agree with.

‘But I was angry at her being called a lazy slob and hoped by posting it, that the person who did this, would think twice in future to how it can affect people with disabilities that are unseen.

‘Mum suffers from severe arthritis in her legs and hands and uses a walking stick constantly.

‘She has leg ulcers which are treated daily and she also suffers with COPD which is monitored by the doctors and she is on medication for, along with various other health concerns.’

Her daughter added: ‘It makes me angry someone would write this.’

A spokesman for Morrison’s said: ‘We are sorry to hear that this happened in our car park.

‘Our disabled spaces are for all disabilities, whether they are visible or not.’

Families who owe a fortune in loans and credit are to get two-month 'breathing...

Was JFK’s true love murdered to protect his killers?