She’s been on cloud nine since confirming her romance with a new billionaire beau.

And Lizzie Cundy looked in high spirits as she attended the opening of the Reign Club Lounge in Piccadilly, London on Thursday night.

The 51-year-old media personality, who recently announced she is dating Donald DJ Friese, 47, couldn’t keep the smile off her face as she sashayed into the venue. 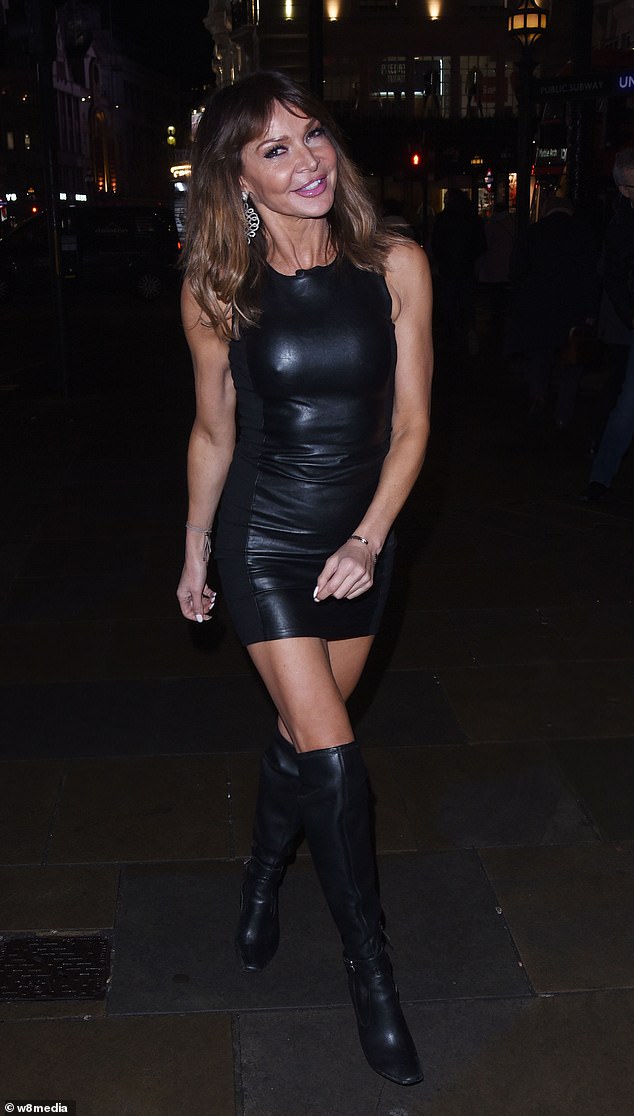 Night out on the town: Lizzie Cundy looked in high spirits as she slipped into a skintight leather mini dress at the opening of the Reign Club Lounge in Piccadilly, London on Thursday night

Lizzie looked phenomenal as she slipped into a skintight leather mini dress.

The high-necked dress showcased her svelte frame, whilst she boosted her petite frame with a pair of thigh high leather boots.

Completing the look with some ornate statement silver earrings and bangle, the presenter showed off her toned body in the ensemble, opting to forgo a coat despite the cold winter weather. 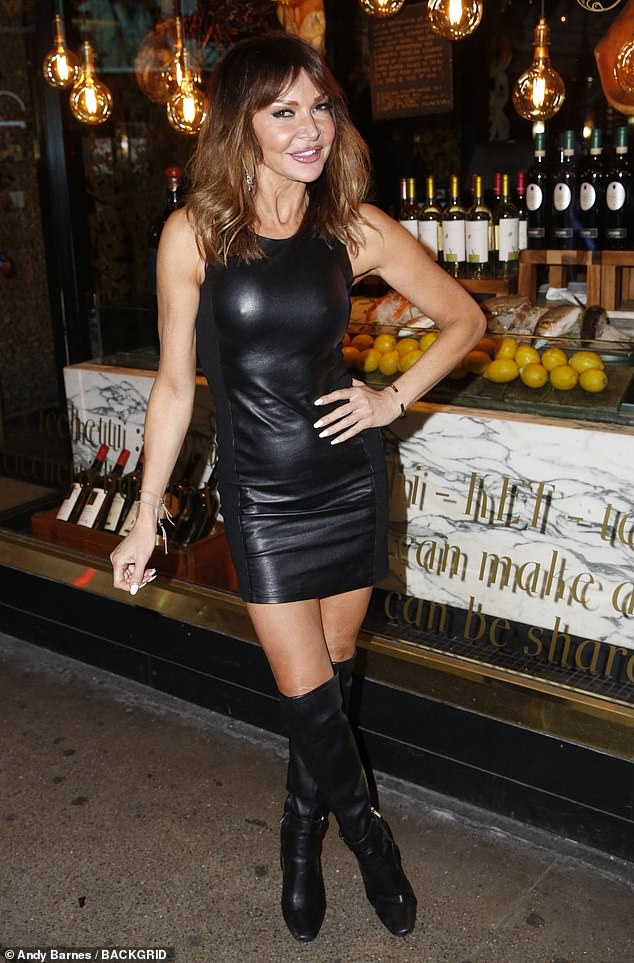 Sultry and seductive: The 51-year-old media personality flaunted her svelte frame in the high-necked panel dress and thigh-high leather boots

Lizzie confirmed her blossoming romance with DJ Friese while appearing on the Jeremy Vine show back in December.

She admitted that while she’s ‘having fun’ with Brandi Glanville’s ex she wants to ‘play it cool’ as ‘it’s early days’ between the pair, following a ‘tough’ break-up from businessman Jeremy Gordeno, 53.

Lizzie blushed as she was teased about her relationship by her fellow panellists – host Jeremy, journalist Angela Epstein, and Dancing On Ice judge Jason Gardiner. 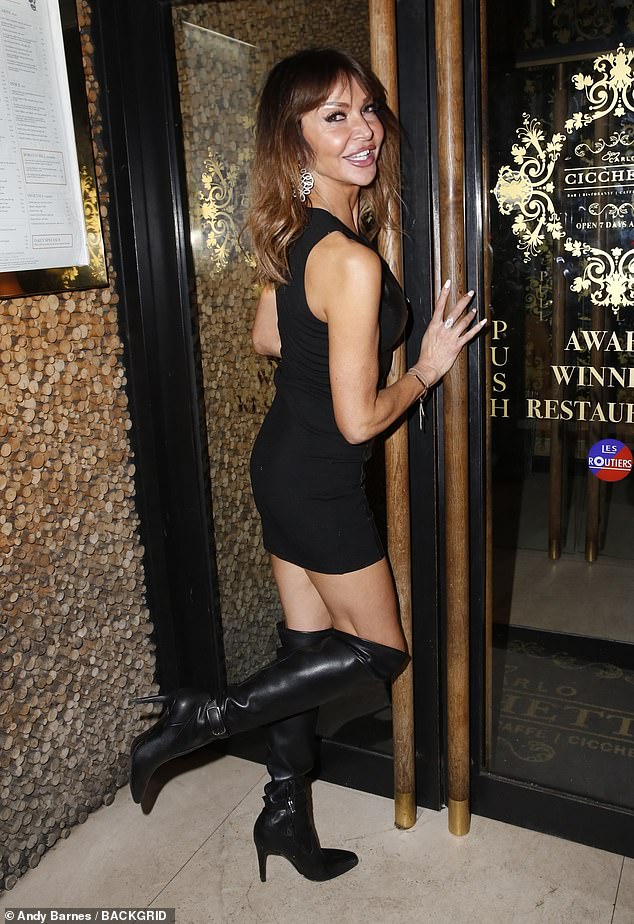 Pasta please: The star popped into Italian restaurant Cicchetti Piccadily for some dinner before hitting the club

The media personality – who was first spotted with the hunk in late November – enthused: ‘Well I have someone who is rather interested in me, so we’ll see what happens.

When asked about whether he boasts a ‘solid’ physique, a shy Lizzie nodded before sharing more details about her new partner.

The This Morning star explained: ‘It’s early days. You have to play it cool. They are new beginnings, fresh start, it’s going to be a great year… it’s all fun.’ 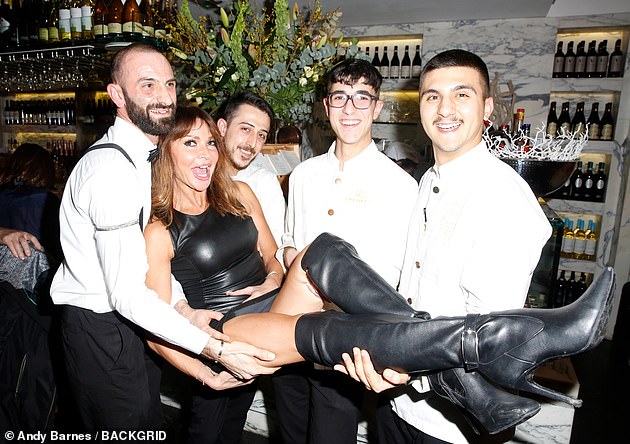 Protecting her modesty: The presenter nearly risked a wardrobe malfunction as she was lifted up by the waiters of Cicchetti Piccadilly, home of celebrity chef Aldo Zilli

Lizzie’s outing comes after she was left terrified when she started to go blind after having filler injected into her eye sockets.

She said she opted to have the Harley Street procedure after her ex Jeremy Gordeno developed a close friendship with his former fiancée’s daughter, 21.

Admitting she was ridden by fear at the side effects, the media personality told MailOnline: ‘I have never been so frightened as to think I could nearly have lost my eyesight by not doing my research and just wanting to look and feel better!’

Lizzie had the procedure in a bid to get rid of her eye bags after a friend had the same procedure and looked great and she too, wanted a quick fix.

The model said that within minutes, she knew that something was awry. She said her eyes puffed up and as time went by, her vision started to go blurry.

Unstoppable: The model recently had a ‘tough’ break-up from businessman Jeremy Gordeno, 53, but has picked herself up and found a new beau 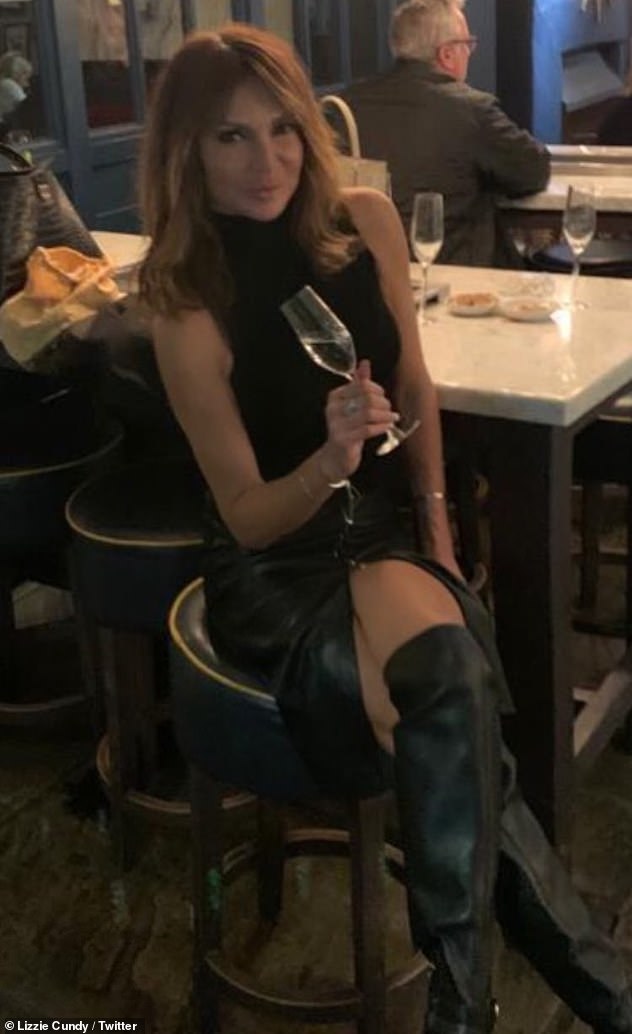 A toast to Lizzie: Taking to social media the star said that she was ‘celebrating good news’ while out in central London

Luckily Lizzie was able to enlist an experienced eye doctor who was able to save her sight, but she wants others to think twice before having similar procedures.

Detailing her recovery, Lizzie told MailOnline: ‘As soon as he put the dissolving solution in, I could see it all disappearing and literally my eyesight came slowly back within minutes.

‘I am a very lucky girl and would warn others to think twice before having any filler as it actually travels and I nearly lost my eyesight!’

The TV star also admitted she feared she wouldn’t be able to see her two sons, Josh and James, again. 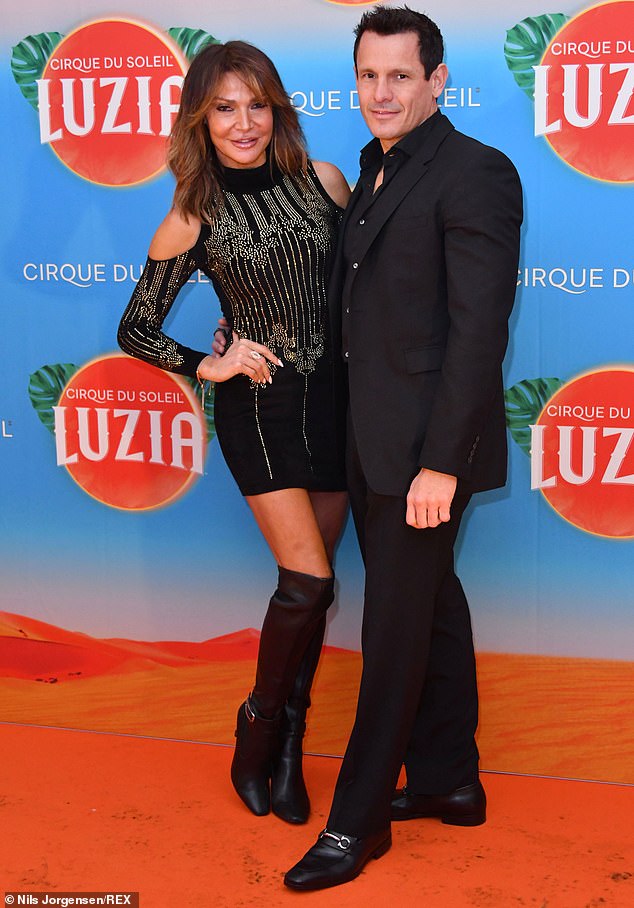 Loved up: Lizzie, 51, recently gushed about her new her beau American billionaire Donald DJ Friese, 47, (pictured at the press night for Luzia by Cirque du Soleil in earlier this month)