Archaeologists have uncovered the first Iron Age wine press in Lebanon, dating from the 7th century BC.

Excavations at the ancient settlement of Tell el-Burak near the city of Sidon uncovered the well-preserved press, which was constructed from plaster made by mixing lime and recycled ceramics.

Wine makers would have stomped the grapes in the 10-foot-square basin, with the resulting liquid trickling down into a semi-circular vat below for collection and fermentation.

It was already known that the ancient Romans admired the Phoenicians for their wine making skills, but until now only amphorae and grape seeds had been found at the Tell el-Burak site.

Exports of Phoenician wine, which was produced on a ‘grand scale’, paved the way for the beverage’s enduring popularity across the Mediterranean. 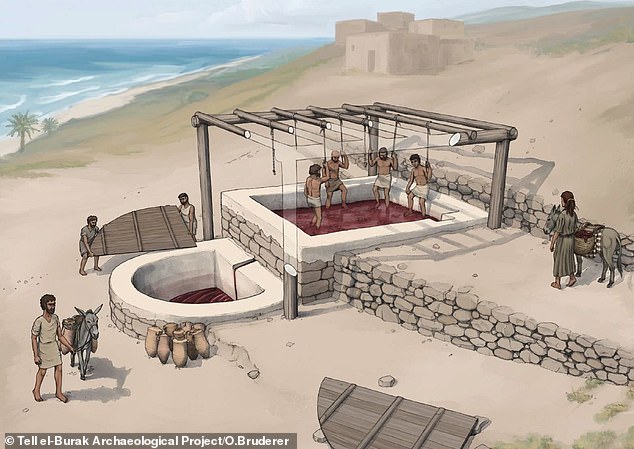 Reconstruction of the wine press at Tell el-Burak, looking from the south-east. Wine makers would have stomped the grapes in the 10-foot-square basin, with the resulting liquid trickling down into a semi-circular vat below for collection and fermentation

Specialised wine production may have been taking place at Tell el-Burak for several centuries, allowing the Phoenicians to make the beverage on a large scale.

‘The results give insights into Phoenician building traditions employed in winemaking-related structures in the Levant,’ say the researchers in the journal Antiquity.

‘The important socio-economic role that wine played in Phoenician societies seems to have favoured the development of innovative solutions in the building technology of installations for the wine production.’

Based on preliminary analysis of associated ceramics, it’s though the press was constructed as early as the 8th century BC and at least the 7th century BC. 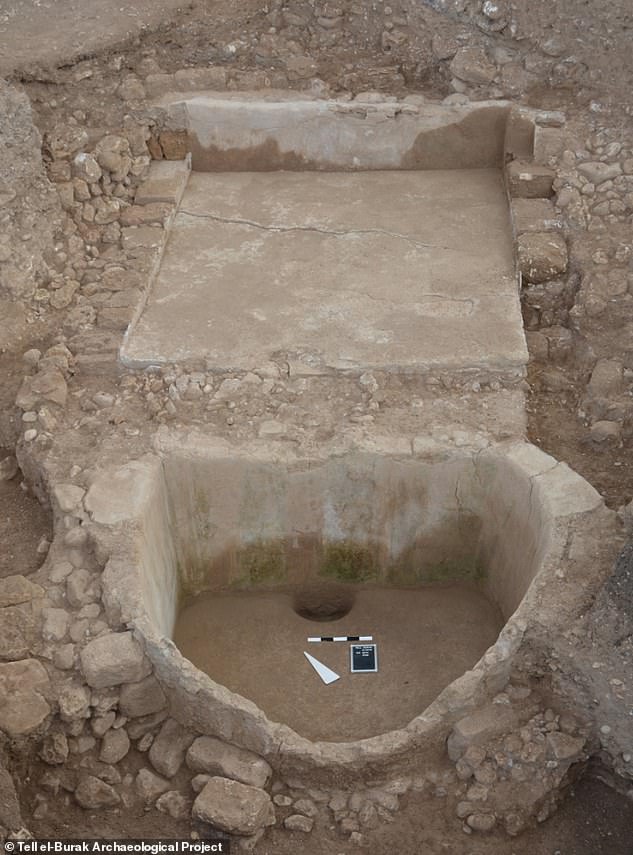 Remains of the wine press today. The well-preserved press also reveals the Phoenicians constructed it from plaster made by mixing lime and recycled ceramics, making it easier to build and stronger

The well-preserved plaster structure, which was in use until the 6th century BC, features a large rectangular treading basin attached to a vat to catch the product.

This vat could hold roughly 4,500 litres of liquid, suggesting they were making wine on a large scale which was then shipped out in the large numbers of amphorae.

Micrographs analysis carried out at the University of Tübingen in Germany and American University Beirut in Lebanon has revealed that this investment was reduced by using recycled ceramics.

This technique, known as cocciopesto, involves grinding down fragments of ceramics and mixing it with mortar. 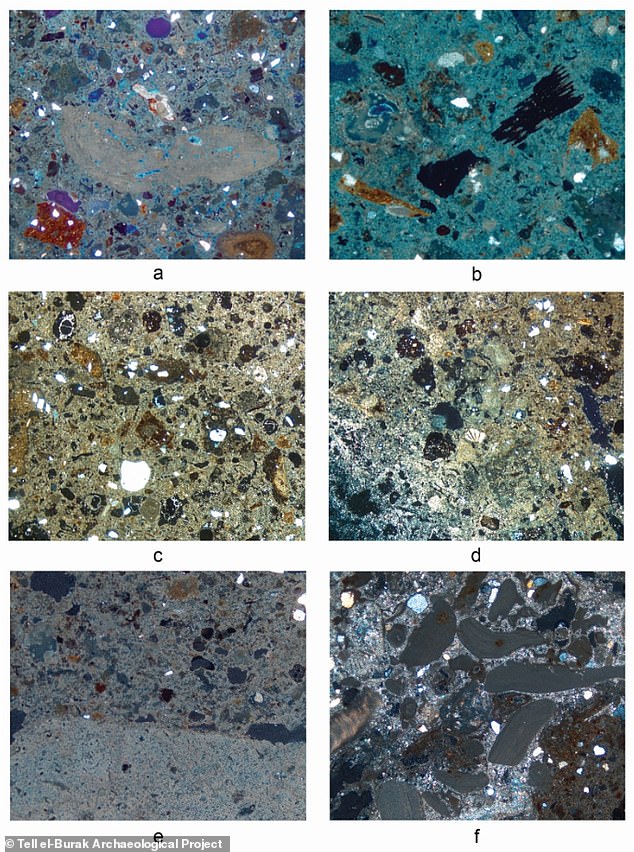 It also produces a plaster that is water-resistant and hard-wearing, giving it a long use life.

The Romans further developed this technology, often using it to make their buildings.

The use of recycled ceramics to make the press would also have helped to keep the production costs down and to help make decent profit on their beverage.

Phoenicians appear to have extensively traded wine and spread traditions of wine production and consumption around the Mediterranean.

Trade routes stretched all along the Med coastlines, from nearby Cyprus and Crete below the Aegean Sea, and along the north of Africa and as far west as modern day Spain. 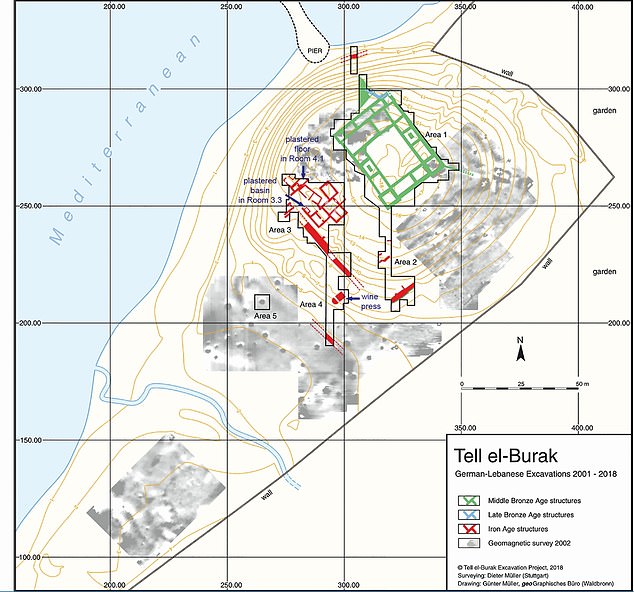 Around 5 miles away from Sidon was the smaller agricultural settlement of Tell el-Burak. It was occupied from 8th to 4th century BC and appears to have supplied the nearby city

Excavations at Tell el-Burak have also yielded the remains of four house structures, comprising former storerooms and a courtyard.

The smaller agricultural settlement of Tell el-Burak was occupied from the 8th to the 4th century BC.

Since 2001, the Tell el-Burak Archaeological Project has been excavating the remains of the town, building up evidence that it was focused on wine production. 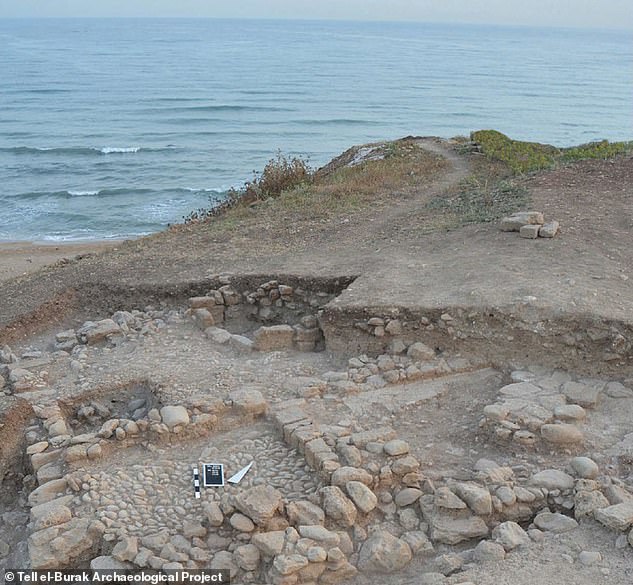 The remains of a house found at Tell el-Burak. Excavations have yielded remains of storerooms and a courtyard

Previous research at Tell el-Burak had identified large quantities of ancient grape seeds and a large number of transport jars known as amphorae.

The amphorae may have then been used to transport the finished product across the eastern Mediterranean.

However, direct evidence of winemaking in Phoenicia itself has been scarce, making this an exciting finding.

Following their success as wine exporters, around the second half of the ninth century BC, Phoenician-speaking groups moved westwards and founded new settlements in the central and western Mediterranean.

As the Phoenicians eventually spread west, they spread their knowledge and skills of how to make wine and their methods of transporting in in amphorae.

This had a great influence on Greek and Roman wine-making, who viewed the Phoenicians as skilled and sophisticated wine experts.

Wine was not only a valuable export for the Phoenicians, but an important part of religious ceremonies, and would have been offered as sacrifices to gods.

WHO WERE THE PHOENICIANS?

Phoenicians were the Iron Age, Semitic-speaking inhabitants of the coastal Levant from around 120-0 to 332 BC.

This region mainly corresponds to modern Lebanon and neighbouring territories.

But from around the second half of the ninth century BC, Phoenician-speaking groups moved westwards and founded new settlements in the central and western Mediterranean.

Some of these became powerful cities in their own right.

Rome’s rival Carthage, a former city in modern-day Tunisia, grew out of a Phoenician colony on these trade routes.

Carthage emerging as a dominant naval power and rival to the early Roman republic.

The famous Carthaginian general Hannibal even invaded Italy with elephants, defeating the Romans in several battles.

that played a key role is spreading wine across the Mediterranean.

Phoenicians played an important role in spreading the alphabet, which was later borrowed by the Greeks and Romans.

Big Ten announces return of 2020 college football season, after postponing due to coronavirus