They were first linked after being seen holding hands at an amusement park in September.

And Halsey and her boyfriend Evan Peters celebrated a relationship milestone Friday when they spent their first Valentine’s Day together.

The 25-year-old singer–songwriter and her 33-year-old American Horror Story star boyfriend shared a playful set of photos to Instagram as they frolicked in a hot tub with Switzerland’s picturesque mountains in the distance. 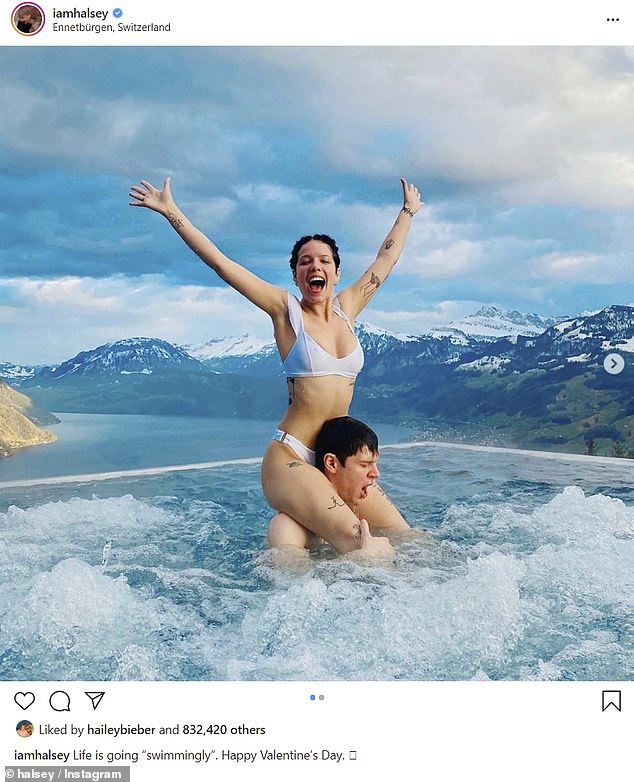 Taking the plunge: Halsey, 25, and her boyfriend Evan Peters, 33, celebrated their first Valentine’s Day together on Friday with a hot tub soak in Ennetbürgen, Switzerland

Halsey looked as if she was having a great time while sitting atop Evan’s shoulders with the stunning vista’s just behind her.

The pop star put on a busty display in her white bikini, which also highlighting her toned tummy.

Evan was mostly submerged and looked as if he was trying to keep the water out of his eyes, though he flashed a winning smile in a second shot. 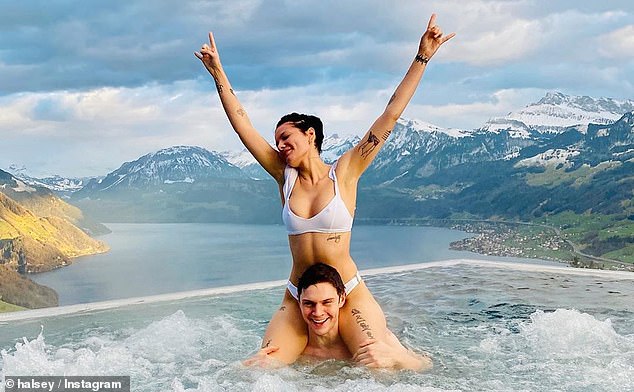 Lovebirds: Halsey looked as if she was having a great time and put on a busty display in her white bikini while riding atop Evan’s shoulders in front of a gorgeous vista

The two lovebirds were first spotted getting close during a trip to Six Flags Magic Mountain, where they were seen holding hands.

Prior to that, the Closer singer dated G-Eazy for about a year, starting in 2017.

The two had a tumultuous on–off relationship, which later inspired her number one hit Without Me. 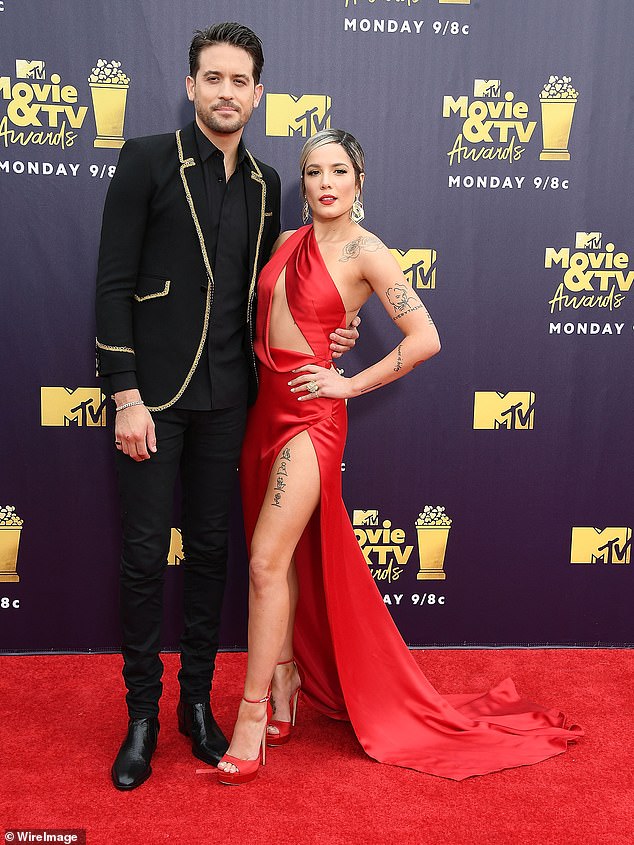 The way they were: Prior to dating Evan, Halsey had a year-long relationship with rapper G-Eazy; pictured in June 2018 at the MTV Movie and TV Awards 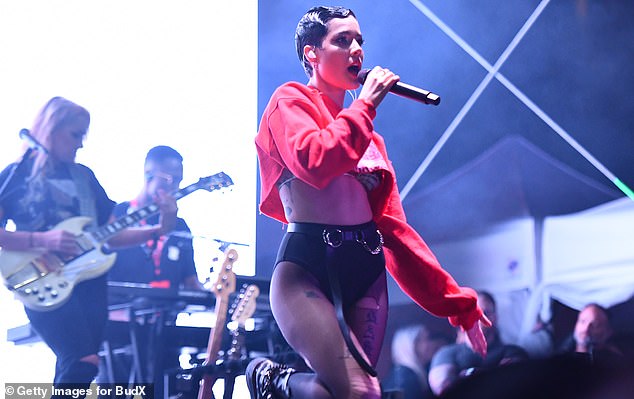 Revelation: The singer revealed that her hit song Without Me, inspired by their tumultuous on–off relationship, helped her realize the relationship had run its course; pictured February 2

The singer revealed that the process of writing the song helped her realize that the relationship had run its course during an interview on the Zach Sang show from 2018.

‘I have to be honest, [writing Without Me] led me to my decision [to break up with G-Eazy] at that time,’ she said.

‘I listened to what I wrote and went “Oh my god, is that how I feel? If that’s how I feel I need to put the pause on this thing right now,” she continued, adding, ‘I’m obviously talking about my relationship. So the song happened first. And it was, just like, this moment of like sincerity.’ 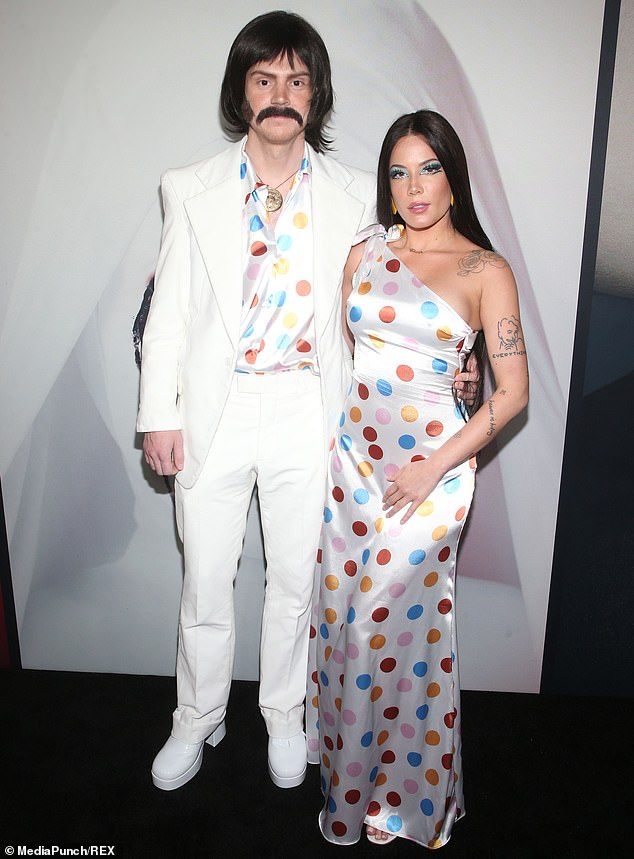 New love: Halsey and Evan were first linked in September 2019 when they were seen holding hands at Six Flags Magic Mountain, but they didn’t make it official until October; pictured in October

Halsey subsequently dated rocker Yungblud from December 2018 until their split in September of last year, around when she and Evan were first linked.

The longtime American Horror Story stalwart was previously engaged to his co-star Emma Roberts, whom he began dating in 2012.

The couple were together on and off, but their relationship was marred by a domestic violence incident in 2013.

Shortly afterward, the two actors got engaged, but they were reported to have split for the final time in March 2019. 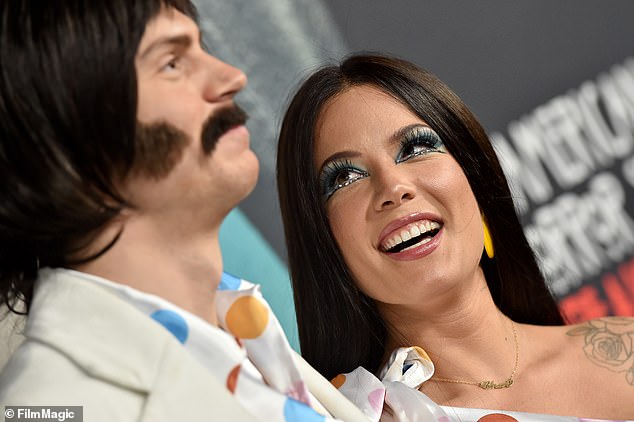 The end: Evan was previously engaged to Emma Roberts, though the relationship was marred by a domestic violence incident and the two separated early last year; pictured in October 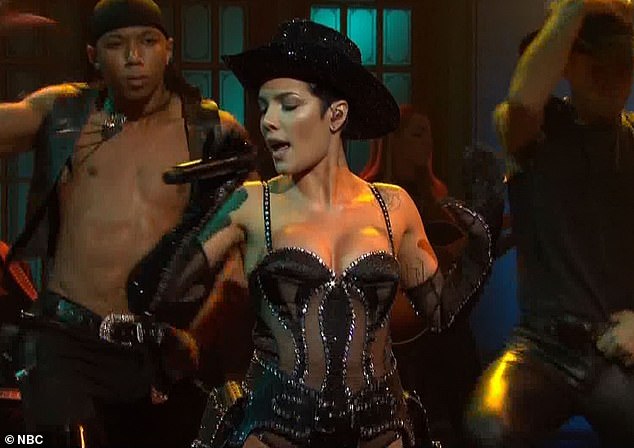 Bad timing: Halsey had a high profile appearance on SNL last month that came days after she accidentally called for the destruction of One World Trade Center in Manhattan 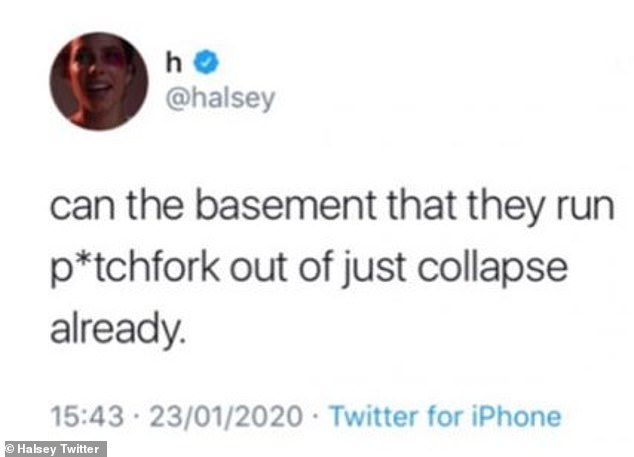 Not a fan: ‘can the basement that they run p*tchfork out of just collapse already’ she tweeted, in reference to a mediocre review her album Manic from the music criticism site

Halsey had a high-profile performance late last month when she was the musical guest on Saturday Night Live, with Adam Driver hosting.

Her appearance came days after she unintentionally called for the collapse of One World Trade Center in Manhattan.

‘can the basement that they run p*tchfork out of just collapse already’ she tweeted, in reference to a mediocre review her new album Manic received from the online music criticism site Pitchfork.

What Halsey didn’t realize was that the Condé Nast property’s offices are located in the World Trade Center.

The singer quickly deleted the tweet after being informed and posted a follow-up explanation.

‘ABSOLUTELY deleted it upon realizing this. was just trying to make a joke! Intended zero harm. Just figured I could poke at them back with the same aloof passive aggression they poke at artists with! Clearly a misunderstanding,’ she wrote, adding a heart emoji. 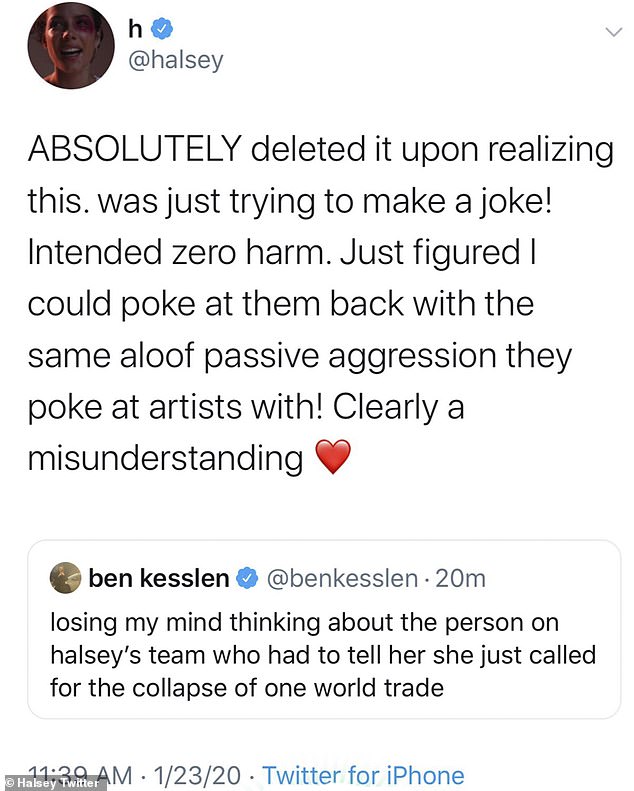 Whoops! After learning that the Condé Nast property’s office were located in the World Trade Center, she quickly deleted the tweet and explained it was only a joke