Not only can you find these at Britain’s luxury hotels, but also on its railways (and yes, even spas).

Here we present some of the loveliest rail journeys in Britain, from the real-life Hogwarts Express to epic Pullman services. Scroll down for the inside track (and to the end to discover the ultimate ‘lovely’ British railway journey).

The ‘Staycation Express’ on the Settle to Carlisle railway 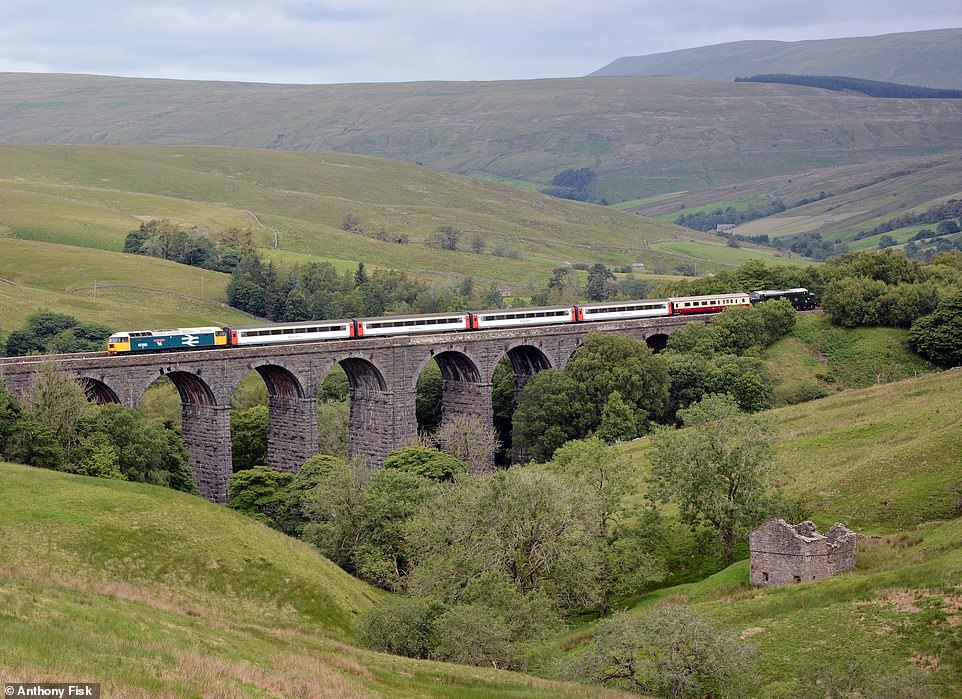 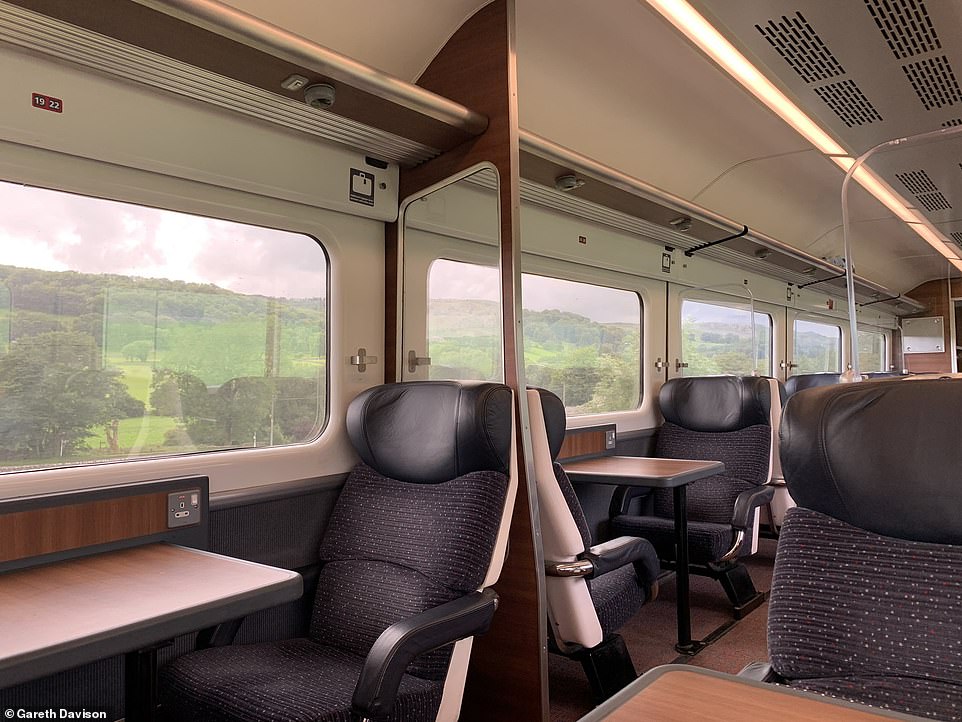 Inside the Staycation Express. This picture is courtesy of Gareth Davison, who posted it to Twitter

The remote Settle to Carlisle Railway is one of the most famous scenic lines in the UK – and now tourists can hop onboard a daily all-first-class ‘Staycation Express’ charter service that runs on a section of this magnificent route.

The service, which runs until September 12, travels from the Yorkshire towns of Skipton and Settle to Appleby in Cumbria and is aimed at ‘long-suffering families’, to give them a great day out after months of lockdown.

According to the operator, Rail Charter Services, the train’s ‘classic Mark 3 InterCity coaches feature well-padded reclining seats around a private table with large windows through which guests can view the stunning Yorkshire Dales and upper Eden Valley in Cumbria’. 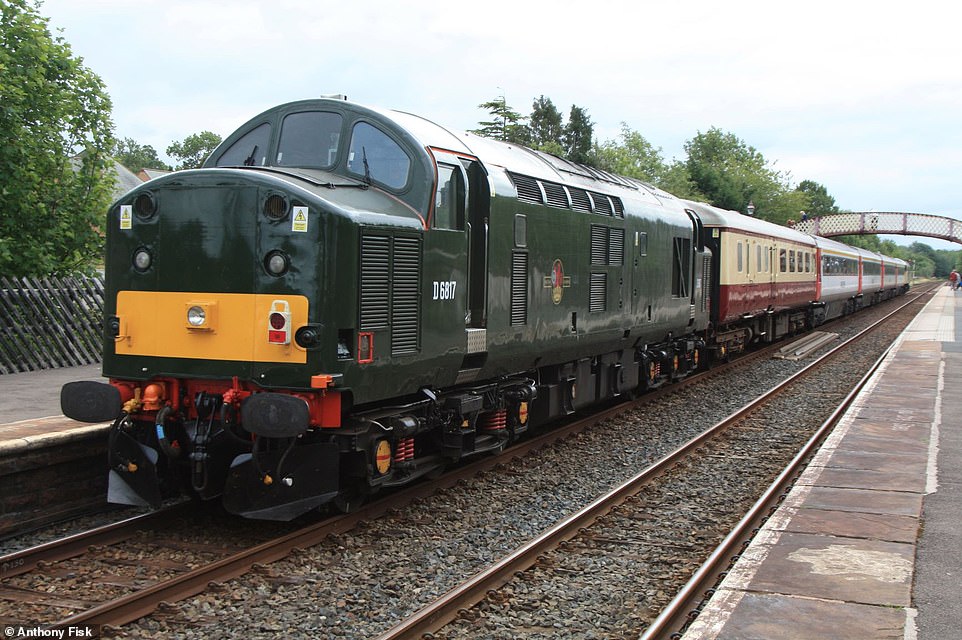 The Staycation Express service is aimed at ‘long-suffering families’, to give them a great day out after months of lockdown 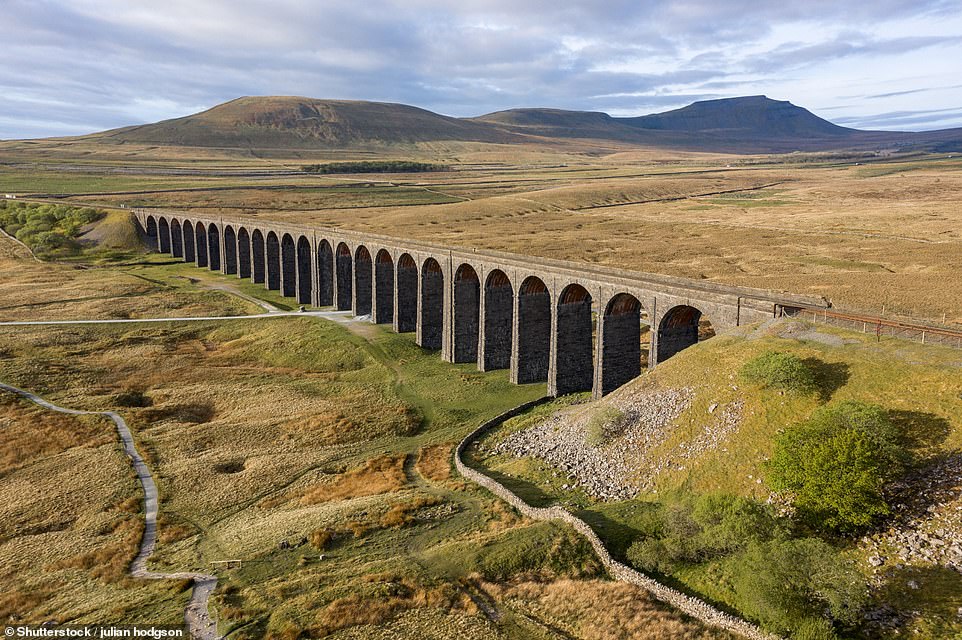 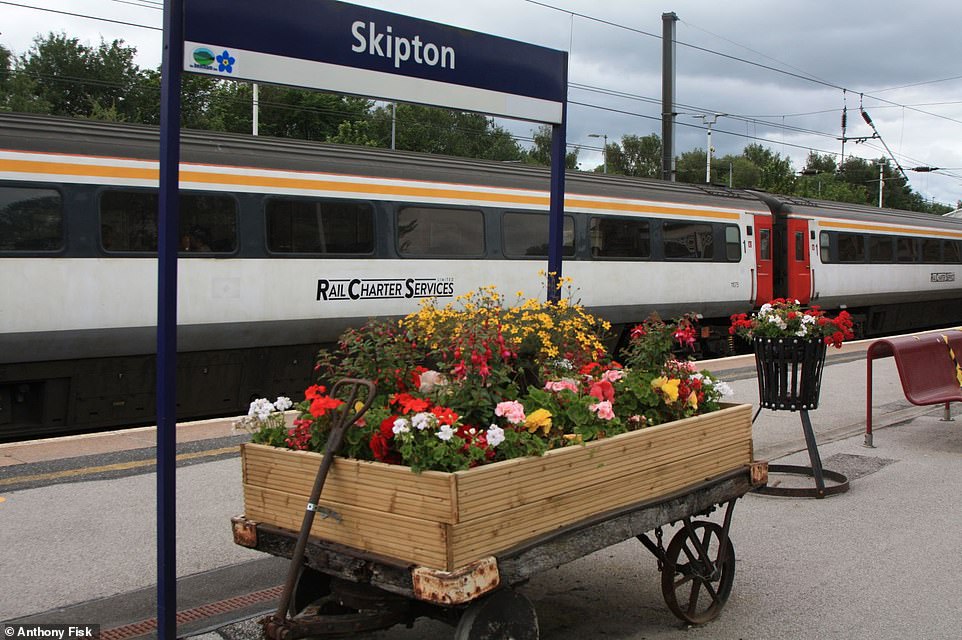 It has also installed perspex screens as a measure against coronavirus and boarding and alighting is by way of a socially divided one-way system.

An onboard guide provides commentary as the train passes points of interest such as Ribblehead Viaduct, Dent – the highest mainline station in England at 1,150ft (350 metres) – and Ais Gill summit, which at 1,169ft (356 metres) above sea level is the loftiest point on the Settle to Carlisle Railway.

The new timetabled charter trains operate three return trips a day, Monday to Saturday, between Skipton and Settle in Yorkshire non-stop to Appleby in Cumbria – a round-trip of 112 miles. First-class day return fares are £29 per person, or it’s £99 for a family of four. To book tickets visit www.railcharterservices.co.uk. The last service will be on September 12. 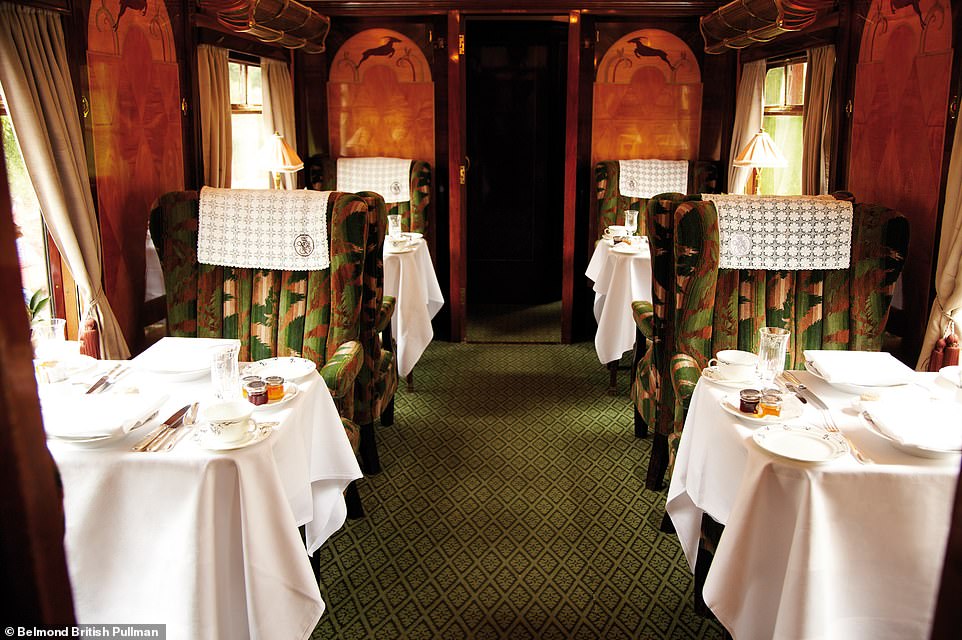 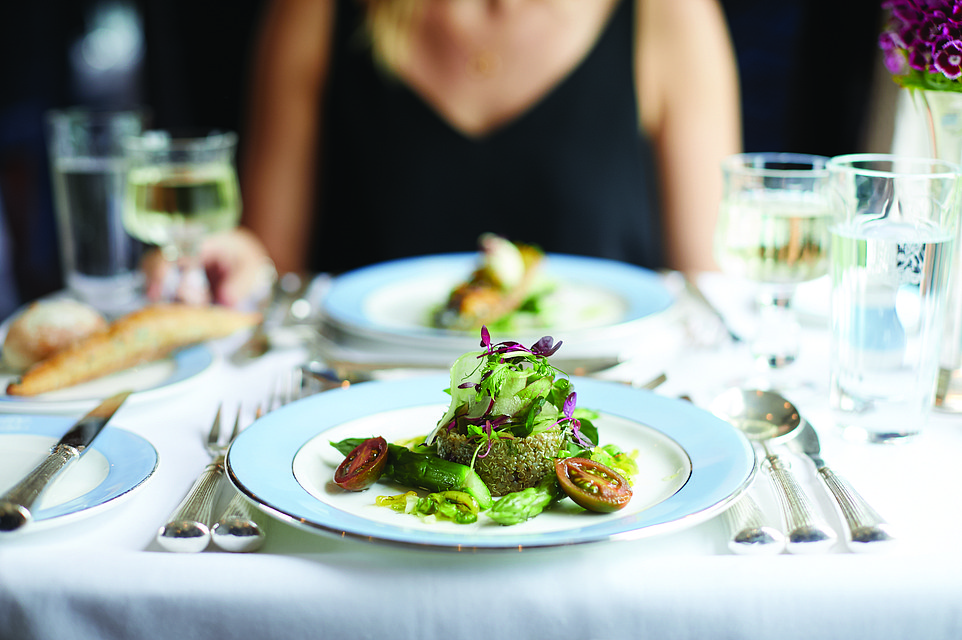 The food is first class, with ‘fine dining to rival even the best London restaurants’

The Belmond British Pullman is a train fit for royalty.

It’s formed from 11 immaculately restored 1920s carriages and Belmond says on its website, without fear of contradiction, that passengers can expect ‘luxury, glamour and a dash of adventure’ as they’re ‘whisked back to a more elegant era’. 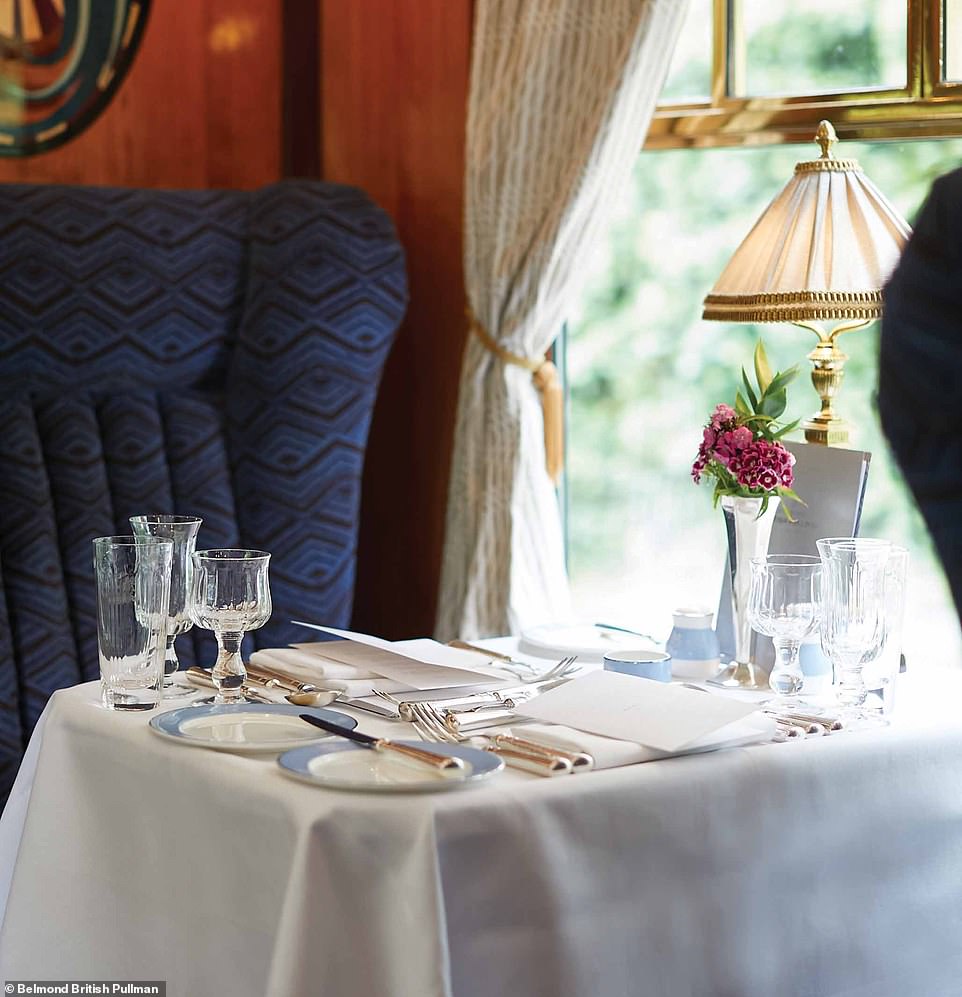 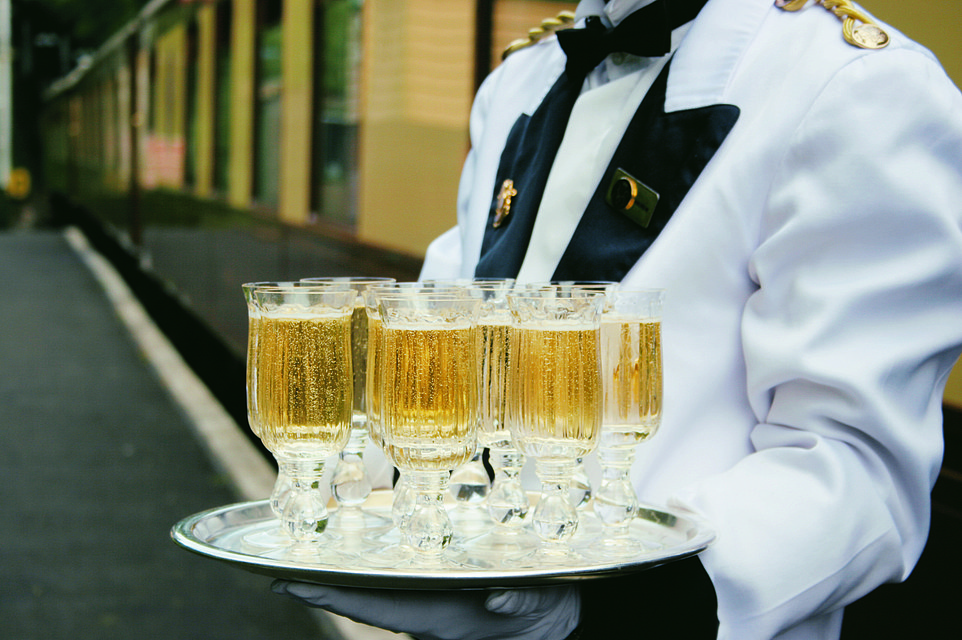 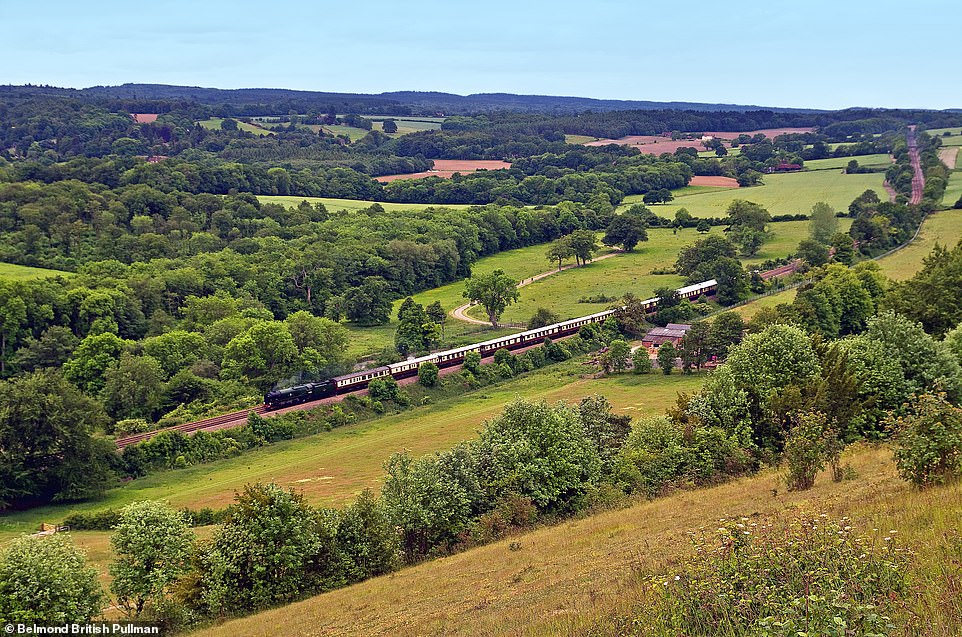 The food is first class too, with ‘fine dining to rival even the best London restaurants’. Think smoked salmon cheesecake, braised Scotch beef, Champagne and Pimms.

The charter train operates excursions from London Victoria around five times a month. The next is ‘The Golden Age of Travel’, departing on Saturday August 22 for a jaunt around Kent. Tickets cost from £340 per person and include a Champagne reception and a five-course lunch. Dress to impress. 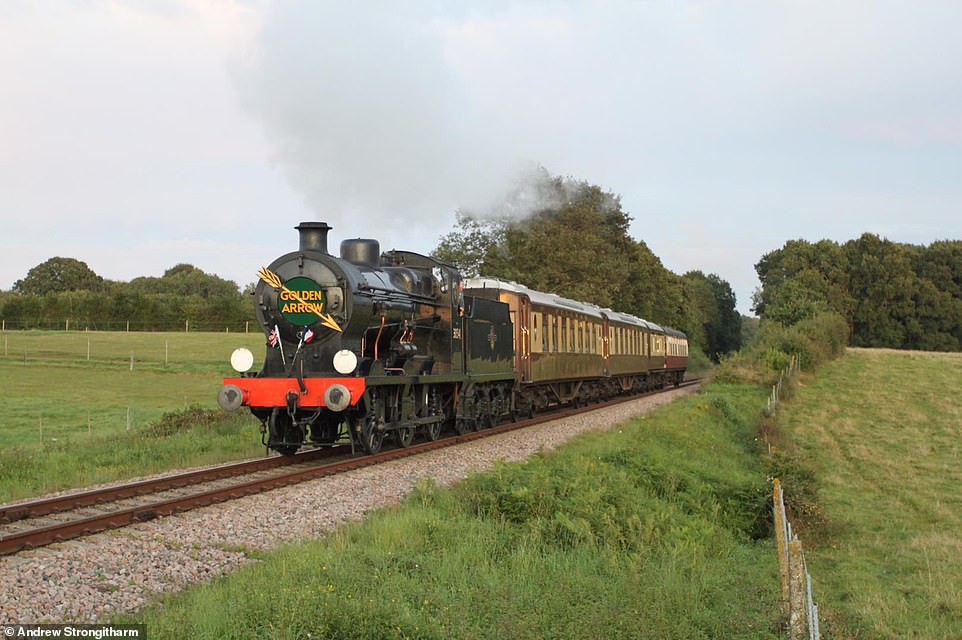 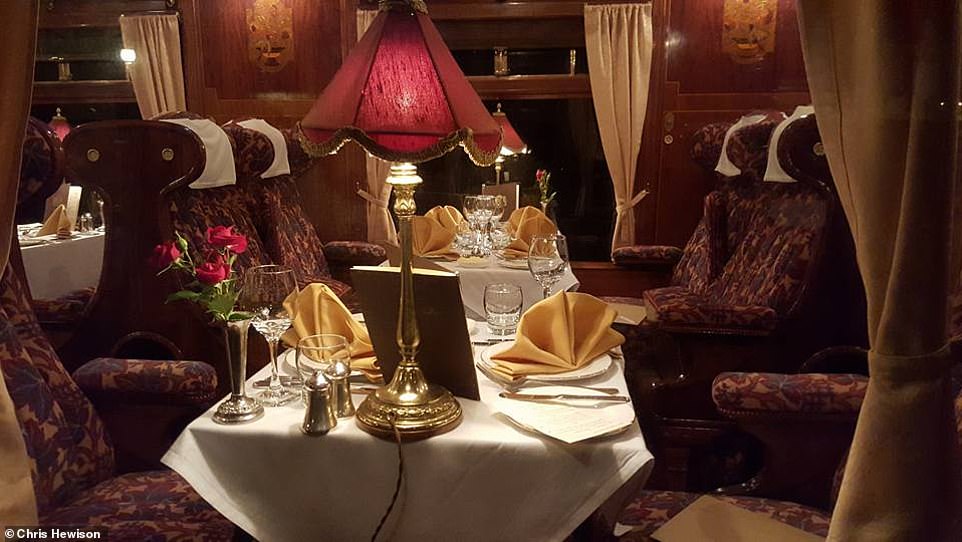 It consists of two vintage Pullman carriages called Christine and Fingall and a first-class carriage called ‘Sapphire’ that recreate the glamorous Golden Arrow service that linked London and Paris from 1926 to 1972.

Onboard passengers enjoy ‘fine food and wine served to the standards of yesteryear’ while trundling through 11 miles of the Sussex countryside. 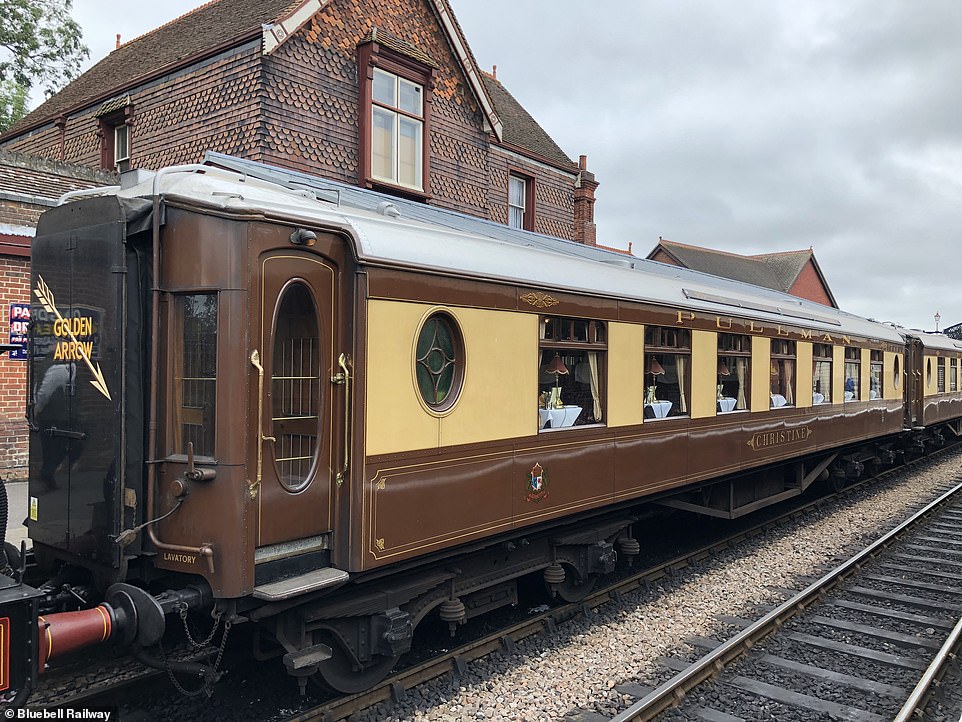 Passengers pay £90, then enjoy ‘fine food and wine served to the standards of yesteryear’

Journeys depart from Sheffield Park station in East Sussex and last for three and a half hours. Tickets cost £90. Visit www.bluebell-railway.com/whats_on/golden-arrow/ for more information. Note – the service is currently suspended while Bluebell Railways works on making it Covid-secure. Its advice is to check the website for updates and announcements.

In the meantime, it is running dining services including breakfast, lunch, tea and dinner trains that allow for social distancing and food hygiene preparation within current guidelines. 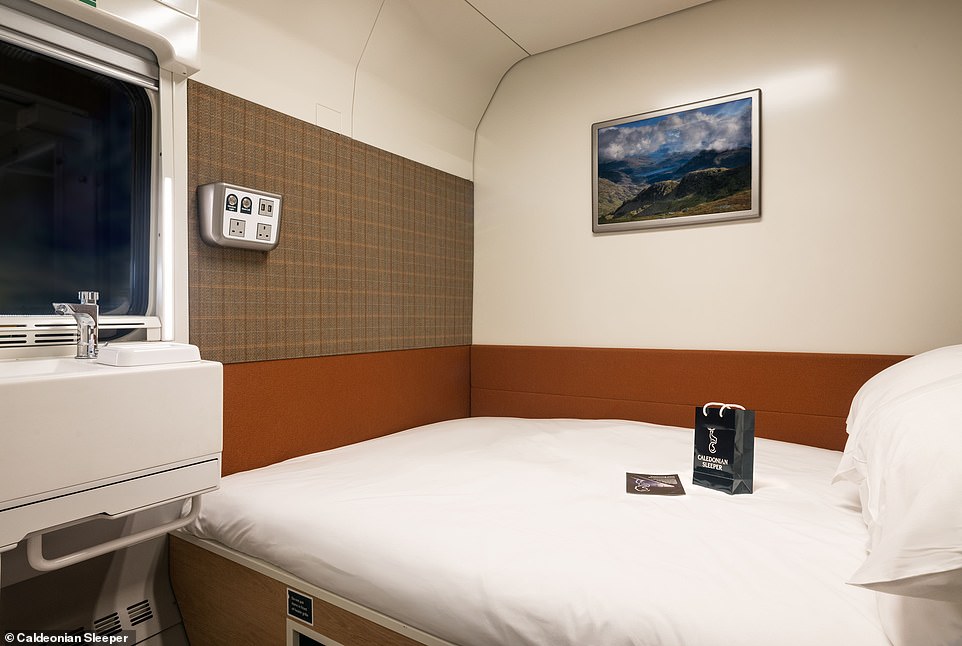 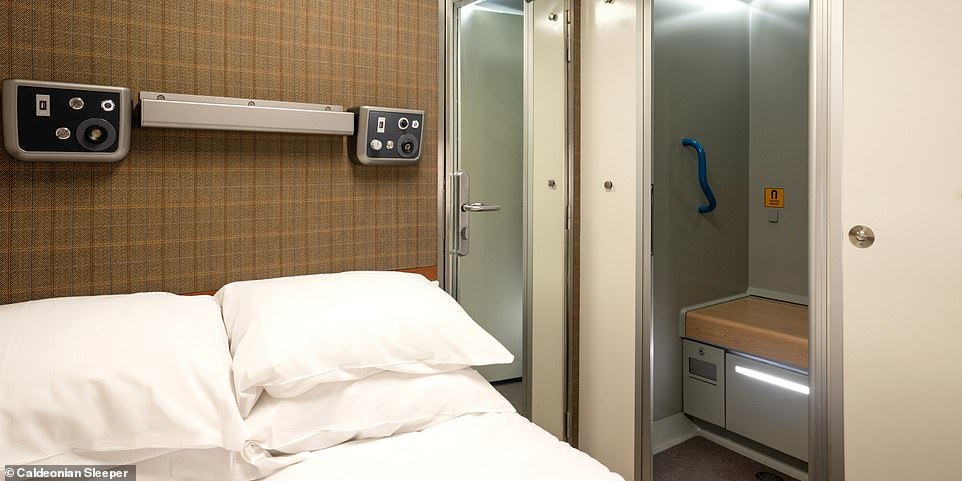 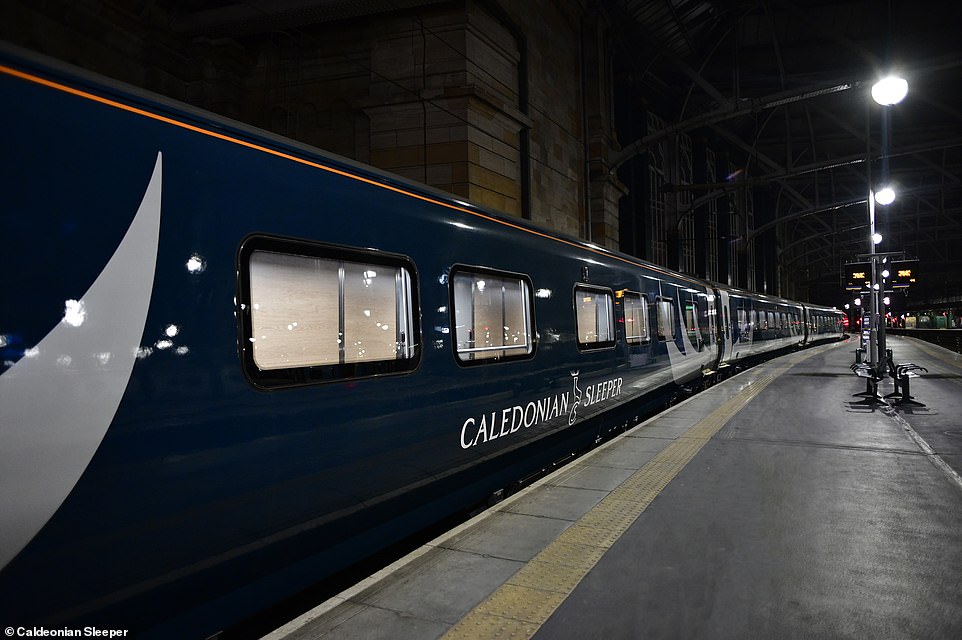 Gleaming: A £150million fleet of 75 carriages were introduced last year

The Caledonian Sleeper is the swankiest way to reach Scotland from London by rail.

A new £150million fleet of 75 carriages were introduced last year and the sleeping options include rooms with en-suites, luxury toiletries, dimmable lights and Glencraft mattresses, which are often found in royal residences. 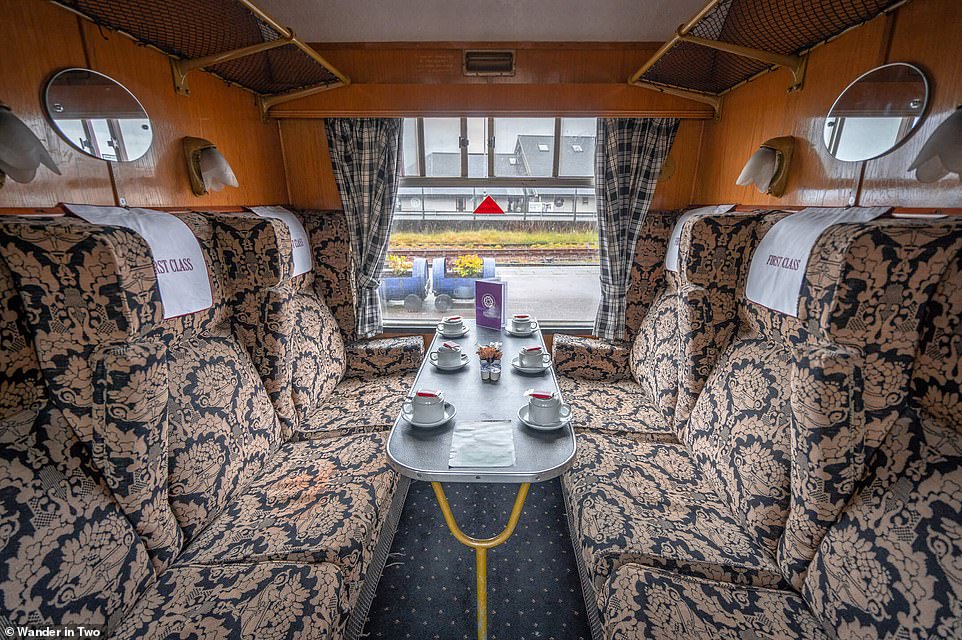 The Jacobite steam train offers ‘Harry Potter’ first-class compartments for six. This picture of one is courtesy of blog  www.wanderintwo.com 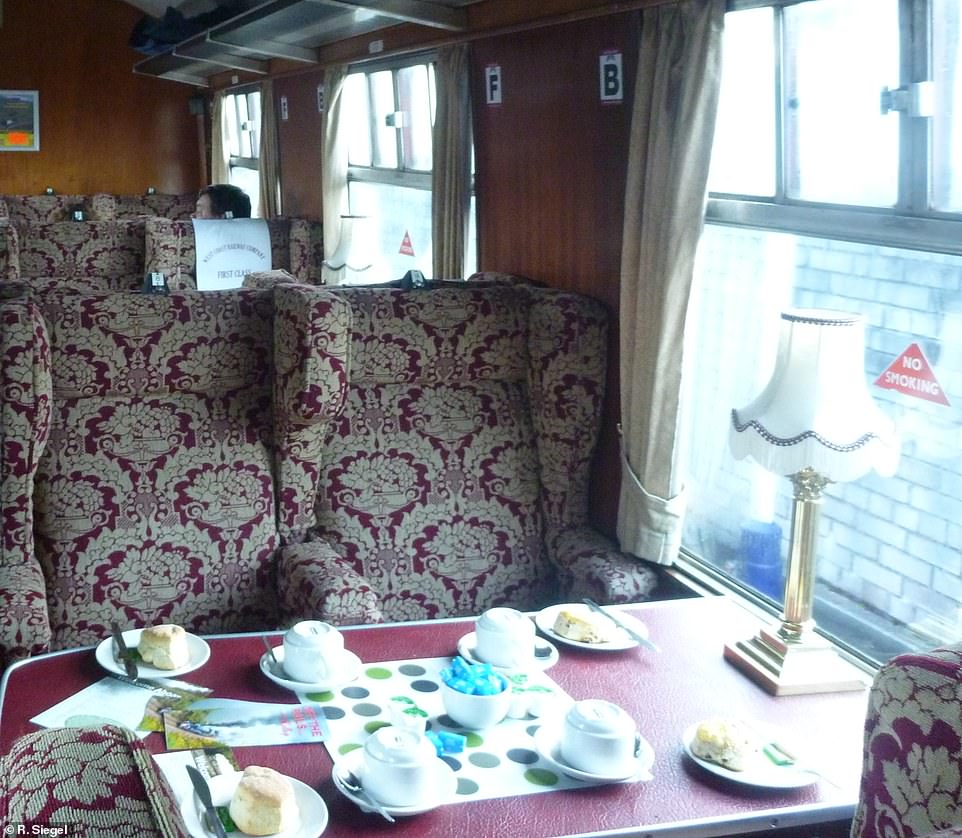 The service crosses the 21-arch Glenfinnan Viaduct featured in the Harry Potter movies. This image is courtesy of Flickr user R. Siegel 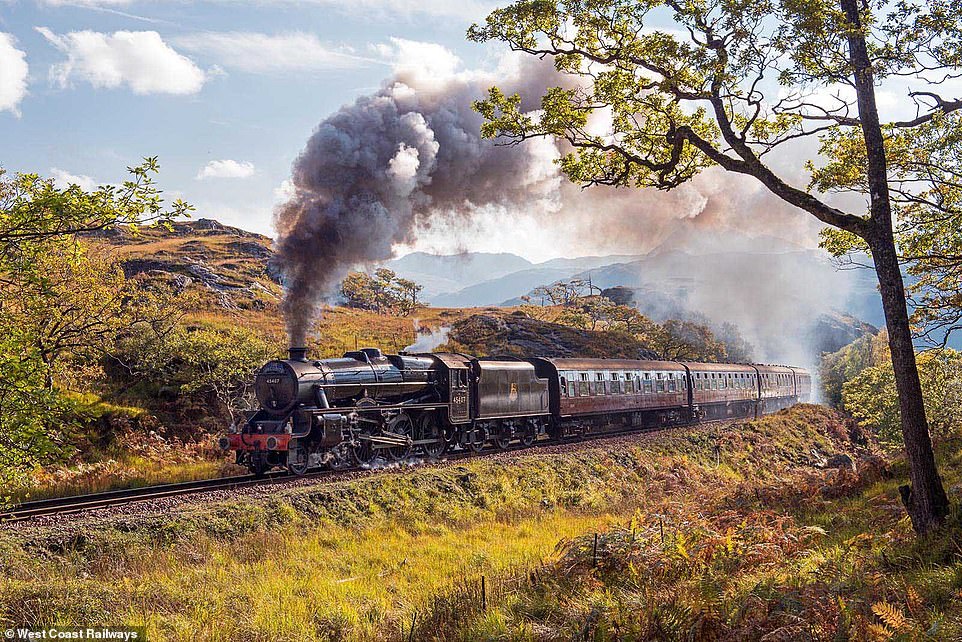 It’s called The Jacobite steam train, but we all know it’s actually a real-life Hogwarts Express.

This classic spellbinding service not only crosses the 21-arch Glenfinnan Viaduct featured in the Harry Potter movies as it trundles the 84 miles from Fort William to Mallaig, but you can also book first-class ‘HP’ compartments for six and pretend you’re off to learn the art of sorcery (as you sip a complimentary tea and admire the upholstery). 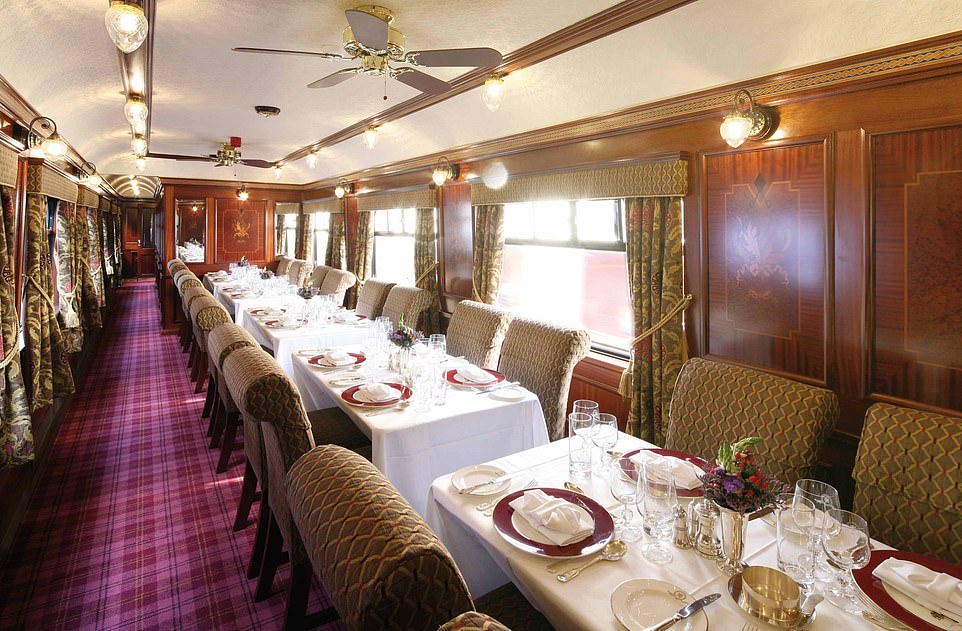 To experience the ultimate lovely British railway journey, you’ll need to buy a ticket for the Belmond Royal Scotsman 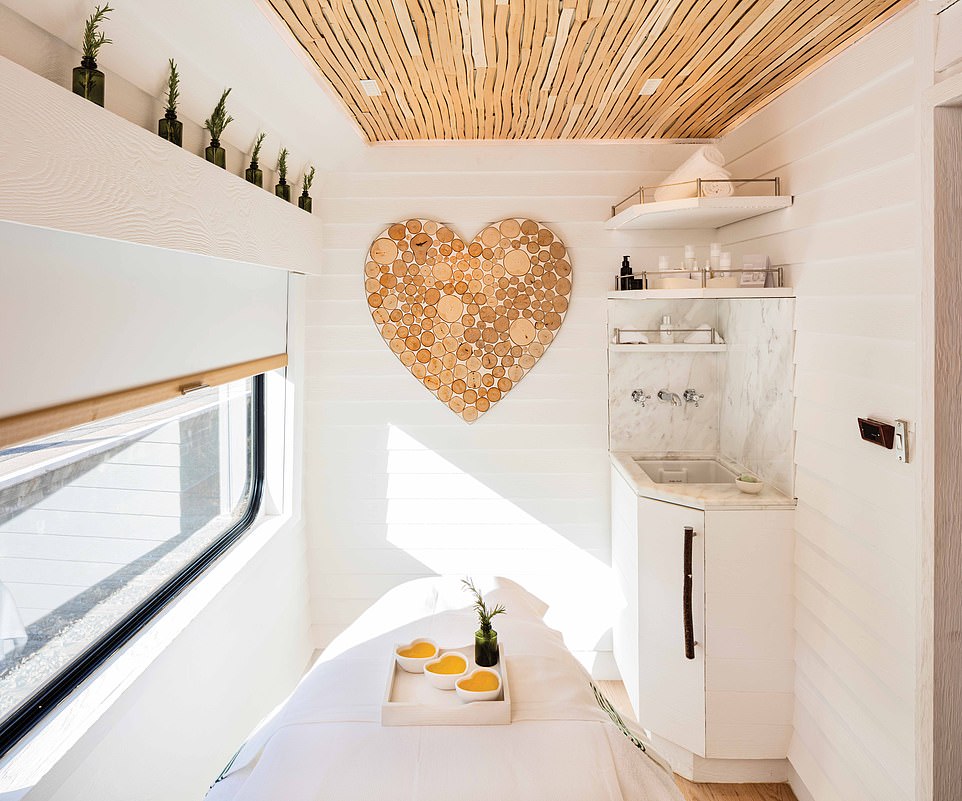 Passengers sleep in en-suite cabins, can gaze at epic Highland scenery from an observation car and even visit an on-train Bamford spa (pictured)

The ultimate lovely British railway journey is this – a trip on the eye-wateringly opulent Belmond Royal Scotsman.

It departs from Edinburgh Waverley and transports passengers on overnight excursions around Scotland in the grandest lacquer-polished style.

‘From the moment you step onto Belmond Royal Scotsman, you are swept up in a world of myth, legend and timeless luxury,’ says the website for it. 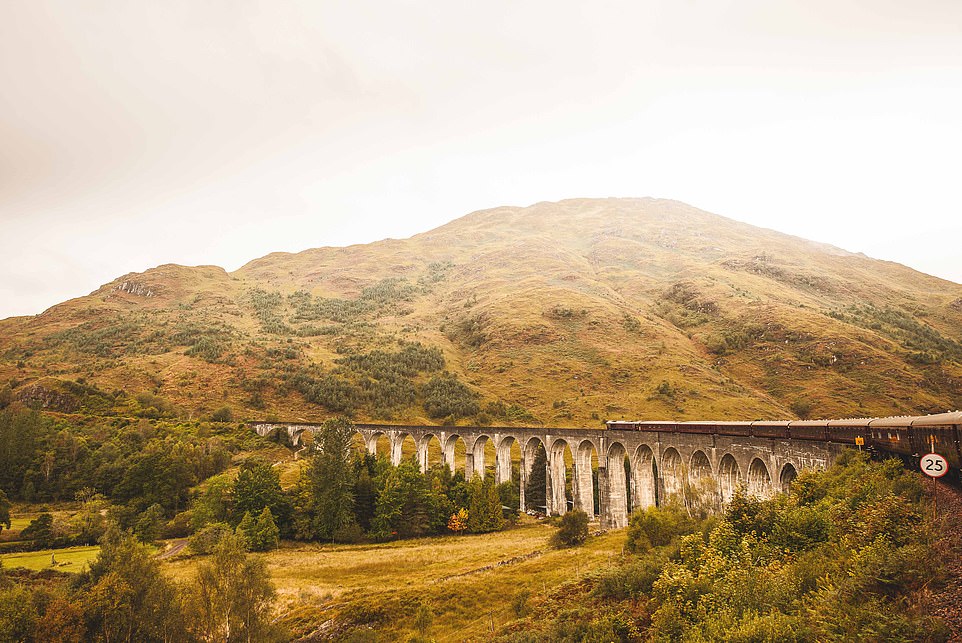 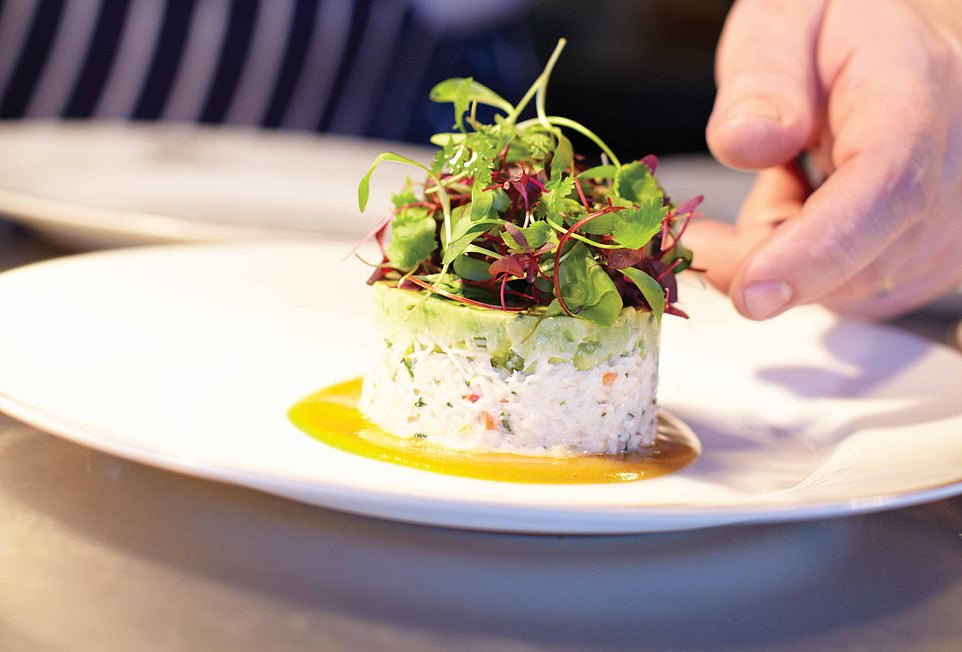 Dining on board the Royal Scotsman is, as you might expect, firmly in the ‘fine’ category

That’s no word of a lie.

Passengers sleep in en-suite cabins with plush beds and full-length wardrobes, they can gaze at the epic Highland scenery from an observation car and even indulge in mid-journey pampering in the on-train Bamford spa.

This heavenly experience isn’t cheap though, with tickets costing from around £3,000. Visit www.belmond.com/trains/europe/scotland/belmond-royal-scotsman/search-results.

Choc full of fun: Discovering that a family day out to...
Read more
Travel

Game of Thrones – with mod cons: A review of a Scottish castle festooned with boutique comforts

A stay at Kilmartin Castle comes with a few warnings.Check-in and you'll need to mind your head, watch your step and keep an...
Read more

Sylvester Stallone's mother, Jackie Stallone, has died. She was 98.Jackie, an astrologer and an early wrestling promoter who appeared on the "Gorgeous Ladies...
Read more
Load more